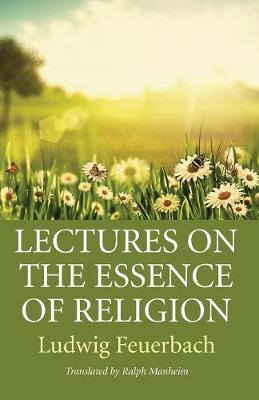 Lectures on the Essence of Religion

Description - Lectures on the Essence of Religion by Ludwig Feuerbach

This book, translated for the first time into English, presents the major statement of the philosophy of Ludwig Feuerbach. Here, in his most systematic work, Feuerbach's thought on religion and on the philosophy of nature achieves its full maturity. Central to the thought of Feuerbach is the concept that man not God is the creator, that divinities are representations of man's innermost feelings and ideas. Philosophy should turn from theology and speculative rationalism to sound factual anthropology. ""My aim in these Lectures,"" writes Feuerbach, ""is to transform friends of God into friends of man, believers into thinkers, worshippers into workers, candidates for the other world into students of this world, Christians, who on their own confession are half-animal and half-angel, into men--whole men."" ""This fine translation makes accessible to us at last a major sourcebook in the philosophy of religion. As the culmination of Feuerbach's most creative decade of writing, it generalizes for every manifestation of religious life the same anthropological interpretation which he previously proposed for Christianity."" --James Collins ""A book of the highest contemporary interest and pertinence."" --Marvin Farber ""Lectures is . . . crucial . . . as a statement of [Feuerbach's] position, as a charter and lodestar to modern thought, as a depth-probe of the generic phenomenon of religion itself. . . . Feuerbach's psychological humanization of religion is a stimulating challenge to believers."" --Arthur Gibson Ludwig Feuerbach (1804-1872) was the leading spirit in the rebellion against idealistic absolutism. His influence on Marx, Nietzsche, and Freud is once again beginning to be recognized.

Book Reviews - Lectures on the Essence of Religion by Ludwig Feuerbach

» Have you read this book? We'd like to know what you think about it - write a review about Lectures on the Essence of Religion book by Ludwig Feuerbach and you'll earn 50c in Boomerang Bucks loyalty dollars (you must be a Boomerang Books Account Holder - it's free to sign up and there are great benefits!)


A Preview for this title is currently not available.
More Books By Ludwig Feuerbach
View All