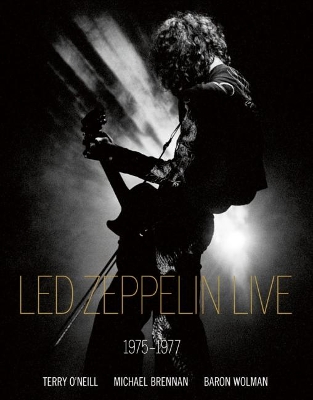 "They were pure rock - and I never saw a band perform quite like they did. They owned the stage and each member had their own special and specific contribution. And to see them live - to capture those moments onstage - well, it was like watching kings surveying their kingdom. Their kingdom was the stage." - Terry O Neill Four men took the stage for the very first time. Their first gig was in a basement below a record shop, but at the peak of their success, they played to over 50 000. An early manager commented that the band would go down like 'a lead balloon'. The 'a' was dropped and 'zeppelin' substituted, and out of an insult, Led Zeppelin was born. Jimmy Page, John Paul Jones, John Bonham and Robert Plant were all experienced and respected musicians in their own right. When they formed a band, they transformed the way we listen to rock. But it wasn't just their music that would shake the world. Their performances left millions with the memories of a lifetime. In partnership with ACC Editions, Iconic Images has created a book that celebrates the live performances that defined a generation. Photographers, including the world-famous Terry O'Neill, Michael Brennan and Baron Wolman have opened up their archives to present Led Zeppelin: Live. With more than 200 million records sold world-wide, including eight consecutive number one albums in the UK alone, Led Zeppelin were inducted into the Rock and Roll Hall of Fame in 1995 and received a Grammy for Lifetime Achievement in 2005. Rolling Stone magazine named Led Zeppelin one of the greatest acts of all time. The three surviving members are recipients of Kennedy Center Honors, and some of the most well-known faces in the history of modern music. SELLING POINTS: . Includes many rare and unseen photos of the band on and off stage . Extensive commentary throughout from top photographers: Terry O'Neill, Michael Brennan and Baron Wolman . A mixture of black & white and colour photography . Edited by Dave Lewis, the author of several acclaimed Led Zeppelin books 200 colour images

» Have you read this book? We'd like to know what you think about it - write a review about Led Zeppelin Live book by Iconic Images and you'll earn 50c in Boomerang Bucks loyalty dollars (you must be a Boomerang Books Account Holder - it's free to sign up and there are great benefits!)

Dave Lewis first heard the music of Led Zeppelin in 1969 at the age of 13. The effect has been a lasting one. He is acknowledged and respected throughout the world as a leading chronicler of the group and its individual members. Dave is the editor and founder of the acclaimed Led Zeppelin magazine Tight But Loose. Established in 1978, it reaches out to Led Zeppelin fans in over 20 countries across the world. In 2015 Dave contributed the liner notes to the official Led Zeppelin release The Complete BBC Sessions. Dave has been lucky enough to attend 15 Led Zeppelin concerts. He has attended various Jimmy Page and John Paul Jones gigs and has witnessed Robert Plant perform live on over 100 occasions.

Anger is an Energy: My Life Uncensored
John Lydon
$16.79 $19.99
More Books By Iconic Images
View All