A powerful new standalone novel from global bestseller Nora Roberts - a story of a mother, a daughter and a traumatic past reawakened 'If you're after the perfect pick-me-up, take-me-away-from-the-world read, then she's your woman'The GuardianThe first time Adrian met her father was the day he tried to kill her... Adrian Rizzo didn't have the easiest childhood, to put it mildly, but she's worked hard to put it behind her and to the outside world she is a beautiful young woman with a successful, high-profile career and a wonderful family and friends. When, out of the blue, she receives a death threat in the post, she is shocked but puts it down to someone's jealousy of her success and tries to forget about it. But Adrian doesn't realise that it's more than just spite. Someone is very, very angry about her happy life and will stop at nothing to bring it all crashing down. 'Nora Roberts is, quite simply, a one-woman phenomenon'Heat'I love Nora Roberts'Stephen King 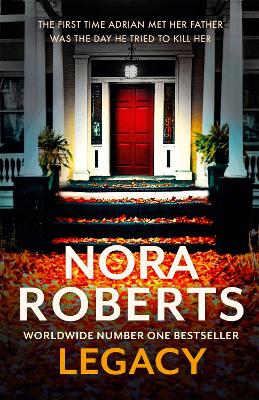 » Have you read this book? We'd like to know what you think about it - write a review about Legacy: a gripping new novel from global bestselling author book by Nora Roberts and you'll earn 50c in Boomerang Bucks loyalty dollars (you must be a Boomerang Books Account Holder - it's free to sign up and there are great benefits!)

3.5?s Legacy is a novel by best-selling American author, Nora Roberts. Adrian Rizzo has grown up fatherless: for her first seven years, her father was unaware he had a daughter; when, at seven, her relationship to him was leaked to the press, he died during a violent assault on her mother, after he had attacked Adrian.

But Adrian has never felt the lack of him: her mother may be busy building a career and business, but she has always had her nanny, Mimi, and loving grandparents, Dom and Sophia. If her relationship with her mother is a bit cool and unconventional, it has made her independent enough to make her own fitness DVD before she has even turned seventeen. And the private school nerds who were there for the start-up of her business are still her friends.

But ever since her first successful exercise DVD, there have been death threats, poems that always arrive in February. Her famous mother tells her it’s the price of being a public figure, but Adrian remains uncomfortable with the annual Ugly Valentines, even moreso when the threat is directed at her grandmother after Sophia joins her for a live-streamed exercise session.

Two sudden tragic deaths see a radical change in Adrian’s situation, putting within her radar the now-nicely-grown-up green-eyed boy on whom she had a tiny crush when she was seven. Raylan Wells is the older brother of her best friend Maya, now returned to her grandparents’ home town in Maryland, the location of her idyllic childhood summer vacation.

Raylan is a successful graphic novelist, a widower with two young children. When he spots tall lithe Adrian in her running gear, he’s immediately inspired to create a new character. And then Raylan’s dog falls in love with Adrian’s.

While it throws a line to comic book fans, this novel is clearly aimed at fitness enthusiasts: there are so many descriptions of exercise routines they will have the eyes of the average reader glazing over.

The blurb seems to be somewhat misleading: the reader will probably expect a novel of romantic intrigue, but this is mostly the story of a woman making a career, a life, with family and friends; the romance element, when it finally appears about two-thirds in, is rather perfunctory; fans of this author’s romance novels will find it disappointing.

Until the last quarter, the intrigue aspect seems more like an aside than a major part of the story; the reader’s first guess about the poet is probably the right one. The background Roberts lays for the story is syrupy sweet and Hollywood happy, but lengthier than necessary. Good detective action in the final 15% gains it an extra half star. Perhaps a novel trying to be too many things at once, this is not Roberts best work. This unbiased review is from an uncorrected proof copy provided by NetGalley and St Martins Press


A Preview for this title is currently not available.
More Books By Nora Roberts
View All