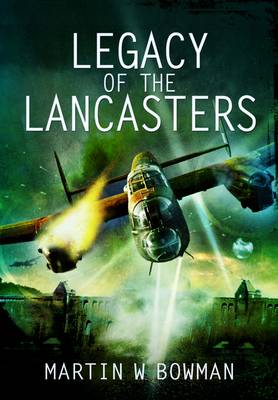 Legacy of the Lancasters

Description - Legacy of the Lancasters by Martin Bowman

Young or old, everyone has heard of the Lancaster bomber. Such is the legacy handed down by this aviation icon that although it is not the most numerous aircraft ever built - two are still flying today, one in Britain and another in Canada with many proudly displayed in museums throughout the world - it is up there with the Spitfire and the Flying Fortress in terms of affection, nostalgia and lasting fame. The legendary Lancaster has bequeathed to the world an invaluable heritage beloved of generations of movie-goers, air show enthusiasts, readers of fine literature and historians alike. Exploits such as the famous low-level raid by 617 Squadron on Germany's hydro electric dams on the night of 16/17 May 1943, the nightly raids on Germany and the sinking of the Tirpitz in 1945 are all without equal. During the 50th anniversary of the raid in 1993 more than 70,000 people thronged Derwent Water to watch the BBMF Lancaster roar over the same dam that 617 practiced on shortly before the raid on 16/17 May 1943. As we approach the 70th Anniversary of the raid, such scenes will no doubt play out once again. It seems timely therefore that such a history should be recorded, charting the course of the Lancaster's career in the skies and the legacy it continues to provide for new generations of aviation enthusiasts and pilots.The text is supplemented throughout by a library of black and white images that work to evoke a real sense of the scale and majesty of this iconic craft. 100 integrated mono images and 8 page colour plate section

Book Reviews - Legacy of the Lancasters by Martin Bowman

» Have you read this book? We'd like to know what you think about it - write a review about Legacy of the Lancasters book by Martin Bowman and you'll earn 50c in Boomerang Bucks loyalty dollars (you must be a Boomerang Books Account Holder - it's free to sign up and there are great benefits!)

Martin Bowman is one of Britain's best-known World War Two aviation historians and authors. His previous books have included works such as Legend of the Lancaster, Confounding the Reich, Duxford and the Big Wings, Clash of Eagles and Mosquito: Menacing the Reich. He lives in Norwich where he plays an active part in the various organisations and museums that abound in what was the heart of the World War Two Allied bomber forces.