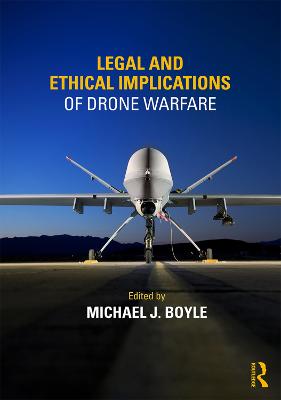 Over the last decade, the U.S., UK Israel and other states have begun to use Unmanned Aerial Vehicles (UAVs) for military operations and for targeted killings in places like Pakistan, Yemen and Somalia. Worldwide, over 80 governments are developing their own drone programs, and even non-state actors such as the Islamic State have begun to experiment with drones. The speed of technological change and adaptation with drones is so rapid that it is outpacing the legal and ethical frameworks which govern the use of force. This volume brings together experts in law, ethics and political science to address how drone technology is slowly changing the rules and norms surrounding the use of force and enabling new, sometimes unprecedented, actions by states. It addresses some of the most crucial questions in the debate over drones today. Are drones a revolutionary form of technology that will transform warfare or is their effect merely hype? Can drone use on the battlefield be made wholly consistent with international law? How does drone technology begin to shift the norms governing the use of force? What new legal and ethical problems are presented by targeted killings outside of declared war zones? Should drones be considered a humane form of warfare? Finally, is it possible that drones could be a force for good in humanitarian disasters and peacekeeping missions in the near future? This book was previously published as a special issue of The International Journal of Human Rights.

Other Editions - Legal and Ethical Implications of Drone Warfare by Michael J. Boyle » Have you read this book? We'd like to know what you think about it - write a review about Legal and Ethical Implications of Drone Warfare book by Michael J. Boyle and you'll earn 50c in Boomerang Bucks loyalty dollars (you must be a Boomerang Books Account Holder - it's free to sign up and there are great benefits!)

Michael J. Boyle is an Associate Professor of Political Science at La Salle University and a Senior Fellow at the Foreign Policy Research Institute in Philadelphia. He is the author of Violence after War: Explaining Instability in Post-Conflict States (2014).

A Preview for this title is currently not available.
More Books By Michael J. Boyle
View All