The Legend Of Sleepy Hollow

And Other Stories from the Sketch Book

Description - The Legend Of Sleepy Hollow by Washington Irving

Sage, storyteller, and wit, Washington Irving created such staples of American fiction as the stories Rip Van Winkle and The Legend of Sleepy Hollow. He earned his preeminence in early American literature with the masterpieces in miniature collected here- dozens of travel essays, tales of romance, biographical discourses, and literary musings.

"His influence on American writers is unquestioned," wrote Edgar Allan Poe, and his stories have proved as enduring as the Catskill Mountains their author immortalized.

"Exceptional talent. . . I am one of his most ardent admirers. I admired Mr. Irving's work so much, in fact, that I gave it the ultimate praise; I 'borrowed it.' "-Edgar Allan Poe

Other Editions - The Legend Of Sleepy Hollow by Washington Irving 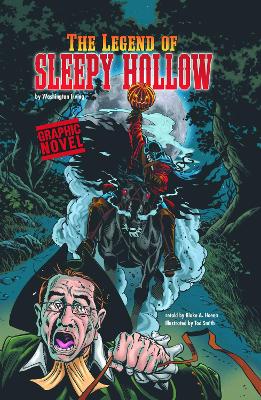 Book Reviews - The Legend Of Sleepy Hollow by Washington Irving

» Have you read this book? We'd like to know what you think about it - write a review about Legend Of Sleepy Hollow book by Washington Irving and you'll earn 50c in Boomerang Bucks loyalty dollars (you must be a Boomerang Books Account Holder - it's free to sign up and there are great benefits!)

Though trained for law, Washington Irving (1783-1859) turned to writing. The humorous A History of New York from the Beginning of the World to the End of the Dutch Dynasty (1809), written under the pseudonym Diedrich Knickerbocker, won him wide popularity. In 1815, Irving journeyed to England to manage a branch of the family business. This venture ended in failure, and he was compelled to write to support himself. International fame came with the publication of The Sketch Book of Geoffrey Crayon, Gent. (1819-20). In 1826, Irving went to Spain on a diplomatic assignment. His three-year stay there inspired The History of the Life and Voyages of Christopher Columbus (1828) and The Alhambra (1832). In 1829, he was assigned to London as secretary of the United States legation, and after extensive traveling, he served as minister to Spain from 1842 to 1846. Then Irving returned to his home in Tarrytown, New York, where he worked and studied until his death. Wayne Franklin, professor of English and director of American Studies at the University of Connecticut, is the author of several books on early American literature and culture, including Discoverers, Explorers, Settlers and The New World of James Fenimore Cooper. An editor of the Norton Anthology of American Literature, he is also founding editor of the American Land and Life series, published by the University of Iowa Press.

A Preview for this title is currently not available.
More Books By Washington Irving
View All