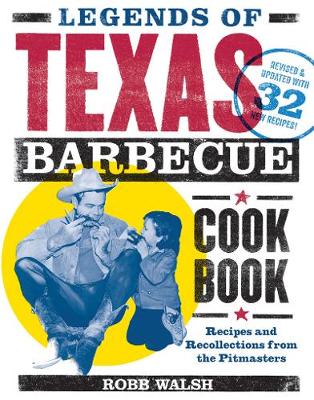 Recipes and Recollections from the Pitmasters

Legends of Texas Barbecue has netted 76,000 copies in 15 printings since it was published in 2002. Since then, the barbecue market has continued to evolve and change so the author has completely revised the book by taking out older, less relevant recipes and adding 30% new content. Many new photos also include the up-to-date pitmasters, the BBQ Summer Camp and Camp Brisket at the University of Texas, as well as images from new restaurants. Legendary new barbecue specialists like Aaron Franklin and Daniel Vaughn provide backcover blurbs.

» Have you read this book? We'd like to know what you think about it - write a review about Legends of Texas Barbecue Cookbook book by Robb Walsh and you'll earn 50c in Boomerang Bucks loyalty dollars (you must be a Boomerang Books Account Holder - it's free to sign up and there are great benefits!)

After years of restaurant reviewing and writing for Houston newspapers, Robb Walsh was dragged out of retirement to be the food editor of Houstonia Magazine, which was founded in 2012. LoTBBQ was selected as the textbook for a barbecue class at the Texas A&M Meat Science Center. Robb has also participated in that class as a guest lecturer. In 2010, he was part of a group that founded a nonprofit called Foodways Texas to preserve and promote Texas food Culture, which is affiliated with UT Austin. He has been a commentator on NPR's Weeeknd Edition. He has been editor in chief of Chile Pepper and a food columnist for Natural History magazine. He's written for Groumet, Saveur, and Fine Cooking. He is the author of 12 books on food including LoTBBQ (nominated for a James Beard Award), and The Tex Mex Cookbook from Broadway (nominated for an IACP award.) He is the founder and head judge of the Austin Chronicle Hot Sauce Festival now in its 23rd year.

A Preview for this title is currently not available.
More Books By Robb Walsh
View All