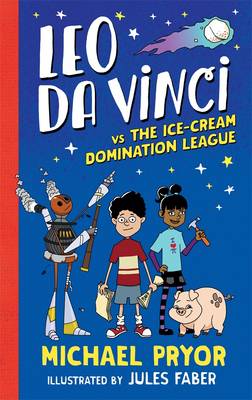 When you're a young genius, there's always time to save the world from evil ... until Mum calls you for dinner.

Help! The Ice-cream Domination League is blowing up the world's ice-cream factories!

Enter Leo da Vinci. Inventor, artist, genius and founder of Fixit International Inc., all at the age of ten.

His team? Meet steam-powered Isaac, maths whiz and wise-cracking pig Ragnar, and Mina from school, who's super-handy with a hammer.

The plan? Ready the Strikebird. Pack the Heat-seeking Cauliflower Missiles. Find out why Comet Big-Kahuna is heading for Earth. Stop the IDL before Mum calls you home for dinner.

Start the cheesy launch music and hold on for your life . . . 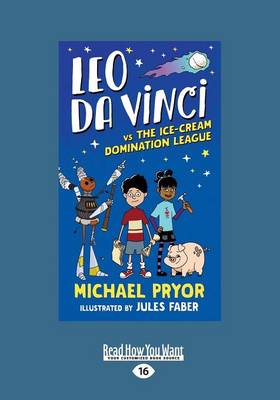 » Have you read this book? We'd like to know what you think about it - write a review about Leo da Vinci vs The Ice-cream Domination League book by Michael Pryor and you'll earn 50c in Boomerang Bucks loyalty dollars (you must be a Boomerang Books Account Holder - it's free to sign up and there are great benefits!)

Michael Pryor (Author) Michael Pryor has published more than twenty-five fantasy books and over forty short stories, from literary fiction to science fiction to slapstick humour. Michael has been shortlisted six times for the Aurealis Awards, has been nominated for a Ditmar award, and six of his books have been CBCA Notable Books, including three books in the Laws of Magic series. Michael's most recent books include The Chronicles of Krangor series for younger readers, The Laws of Magic series and The Extraordinaires series for older readers, as well as 10 Futures, a collection of interlinked stories imagining what our next 100 years might be like, and middle grade technothriller Machine Wars. Jules Faber (Illustrator) Jules Faber is a multi-award-winning cartoonist and illustrator. He has published numerous comic strips, worked for various newspapers, taught cartooning around Australia, been in multiple art exhibitions and has worked as an animator on a Disney show. Jules has served three terms as President of the Australian Cartoonists Association, the world's oldest cartoonist's organisation. And on top of all that, he loves illustrating