Leo Strauss's lifelong intellectual mission was to recover 'classical rationalism', a pursuit that has made him a controversial figure to this day. While his critics see him as responsible for a troubling anti-democratic strain in modern politics, others argue that his thought is in fact the best defence of responsible democracy.
Neil Robertson's new introduction to Strauss aims to transcend these divides and present a non-partisan account of his thought. He shows how Strauss' intellectual formation in Weimar Germany and flight from Nazism led him to develop a critique of modernity that tended to support a conservative politics, while embracing a radical sense of what philosophy is and can be. He examines the way in which Strauss built upon the thought of Nietzsche and Heidegger in order to show how their 'nihilism' led not to a standpoint beyond western rationality, but to a recovery of its roots.
This skillful reconstruction of the coherence and unity of Strauss' thought is the essential guide for anyone wishing to fully grasp the contribution of one of the most contentious and intriguing figures in 20th century intellectual history.

Other Editions - Leo Strauss: An Introduction by Neil G. Robertson 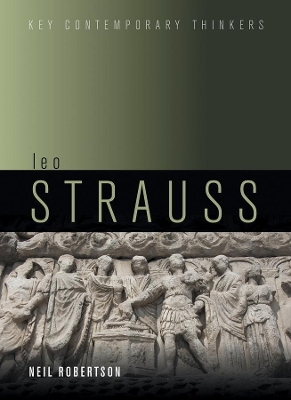 » Have you read this book? We'd like to know what you think about it - write a review about Leo Strauss: An Introduction book by Neil G. Robertson and you'll earn 50c in Boomerang Bucks loyalty dollars (you must be a Boomerang Books Account Holder - it's free to sign up and there are great benefits!)


A Preview for this title is currently not available.
More Books By Neil G. Robertson
View All