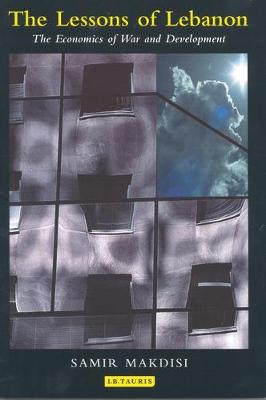 The Lessons of Lebanon

The Economics of War and Development

Description - The Lessons of Lebanon by Samir A Makdisi

Since 1945, over 200 intra-state conflicts have taken place in countries that achieved independence from colonial rule after World War II. The case of Lebanon offers a striking illustration of these interlocking influences on projects of national economics development. The persistently sectarian nature of the country's political instutions, the relatively poor quality of governance and the major civil war that engulfed the country from 1975 to 1990, together define not only the context in which the achievements and failures of Lebanese development must be assessed, but also the continuing challenges that it must face in the era of globalization. This text offers an in-depth analysis of Lebanese economic development during the second half of the 20th century, with special emphasis on the civil war and its aftermath. Makdisi offers a definitive assessment of the principal phases of national development since Lebanese independence in the 1940s, and a study of those conditions requisite for sustainable development for Lebanon, as for many other developing countries.

Buy The Lessons of Lebanon by Samir A Makdisi from Australia's Online Independent Bookstore, Boomerang Books.

Book Reviews - The Lessons of Lebanon by Samir A Makdisi

» Have you read this book? We'd like to know what you think about it - write a review about Lessons of Lebanon book by Samir A Makdisi and you'll earn 50c in Boomerang Bucks loyalty dollars (you must be a Boomerang Books Account Holder - it's free to sign up and there are great benefits!)

Samir Makdisi is Professor of Economics, Chair of the Economics Department and Director of the Institute of Financial Economics at the American University of Beirut (AUB). He has served as Lebanon's Minister of National Economy in, as Deputy President of AUB and is presently a member of the Governing Board of the Global Development Network (Washington DC).