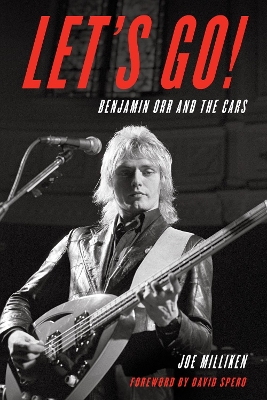 "When Ben got out of the hospital he said, 'When I fall down and can't pick myself up we'll know it's over. Until then, we rock!'" - Jeff Carlisi

Benjamin Orr was the co-founder, co-lead singer, and bassist for the platinum-selling rock band The Cars. Often considered the band's heartthrob, Orr possessed an incredible voice, diverse musical talent, and rare stage presence, all balanced by an enigmatic personality and a relentless determination to reach rock stardom.

Selling over 30 million albums worldwide with fifteen Billboard Top 40 hits, The Cars certainly achieved success. Within a decade of the debut album, though, Orr found himself adrift and without a band. Veteran music journalist Joe Milliken draws together interviews with over 120 family members, friends, bandmates, and music associates from Orr's life, as well as many unpublished and never-before-seen photos from private collections, to reveal an intimate portrait of one of classic rock's greatest talents. From Orr's first performances as a house-band musician for the TV show UpBeat through his creation of The Cars with Ric Ocasek to Orr's eventual rebirth with the supergroup Big People, this definitive account of Orr's life is a rollercoaster ride that sheds new light on the history of The Cars.

Orr is no longer able to rock with The Cars, but the music he made with them continues to attract new generations of fans. Coinciding with the band's 2018 induction into the Rock and Roll Hall of Fame, this first-ever biography of Benjamin Orr immortalizes his legacy as a deeply kind-hearted and exceptionally talented musician who would stop at nothing to live his rock and roll dream.

Other Editions - Let's Go!: Benjamin Orr and The Cars by Joe Milliken » Have you read this book? We'd like to know what you think about it - write a review about Let's Go!: Benjamin Orr and The Cars book by Joe Milliken and you'll earn 50c in Boomerang Bucks loyalty dollars (you must be a Boomerang Books Account Holder - it's free to sign up and there are great benefits!)


A Preview for this title is currently not available.
More Books By Joe Milliken
View All