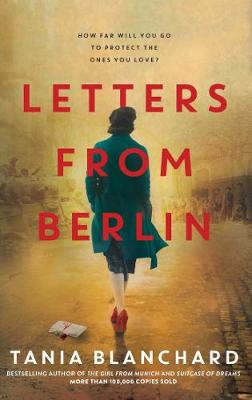 From the bestselling author of The Girl from Munich and Suitcase of Dreams comes an unforgettable tale of love, courage and betrayal inspired by a true story

As the Allied forces edge closer, the Third Reich tightens its grip on its people. For eighteen-year-old Susanna Goettmann, this means her adopted family including the man she loves, Leo, are at risk.

Desperate to protect her loved ones any way she can, Susie accepts the help of an influential Nazi officer. But it comes at a terrible cost - she must abandon any hope of a future with Leo and enter the frightening world of the Nazi elite.

Yet all is not lost as her newfound position offers more than she could have hoped for ... With critical intelligence at her fingertips, Susie seizes a dangerous opportunity to help the Resistance.

The decisions she makes could change the course of the war, but what will they mean for her family and her future?

'An original and innovative take on the World War II genre that captures the hauntingly desperate essence of the war. Tania Blanchard has written yet another spectacular novel. Don't miss this.' Better Reading

'Captures the intensity of a brutal and unforgiving war, successfully weaving love, loss, desperation and, finally, hope into a gripping journey of self-discovery' Courier Mail

'A tumultuous journey from order to bedlam, and from naive acceptance of the status quo to the gradual getting of political wisdom' Sunday Age

» Have you read this book? We'd like to know what you think about it - write a review about Letters from Berlin book by Tania Blanchard and you'll earn 50c in Boomerang Bucks loyalty dollars (you must be a Boomerang Books Account Holder - it's free to sign up and there are great benefits!)

4.5?s “I nodded, not sure that I wanted to be a part of the Nazi social elite. It meant that I was one of them, with the same warped values and attitudes. It felt wrong in all sorts of ways. I took a large swallow of the champagne. But I had to remember why I was doing this.”

Letters From Berlin is the third novel by Australian author, Tania Blanchard. The Hecker family are everything to her, all she has left. Onkel Georg and Tante Elya took in seven-year-old Susanna Göttmann when her family died; their son, Leo has become the love of her life. Susie knows that Leo will never understand why she has chosen to keep company with Julius Siebenborn, an elite Nazi, a man Leo says can’t be trusted.

Tante Elya is a Russian Jew; as a prosperous estate owner, Onkel Georg has managed to keep her and their “mischling” son safe by catering to the expensive tastes of those in power. But with the Fuhrer’s determination to rid Germany of all Jews, the rules change at the whim of Nazi executive, and only someone like Julius can create loopholes for the people Susie loves. She has to trust him.

In her third novel, Blanchard easily captures her setting and the era; her plot is credible and her characters are easy to love (or despise, as required); her extensive research is apparent on every page of this rather different look at Word War Two.

Stories about this war often present the perspective of those in Allied countries, but of course, the ordinary German people were at the receiving end of bombs too; they had rationing; their men were conscripted to fight in a war they didn’t necessarily believe in. And they had further disadvantages: they were being led by a madman; and the Third Reich propaganda machine kept them ignorant of much that was being done in their name.

Blanchard takes the many known facts pertaining to the wartime experiences of her own grandmother’s family and brings them to life, weaving into them aspects of self-sacrifice and betrayal, love and loss and loyalty. For, if war brings forth the worst of humanity, it also showcases the best of it; in extraordinary circumstances, ordinary people manage to achieve extraordinary things, and Blanchard’s novel emphatically demonstrates this. This is an utterly engrossing read. This unbiased review is from an uncorrected proof copy provided by NetGalley and Simon and Schuster Australia

A Preview for this title is currently not available.
More Books By Tania Blanchard
View All