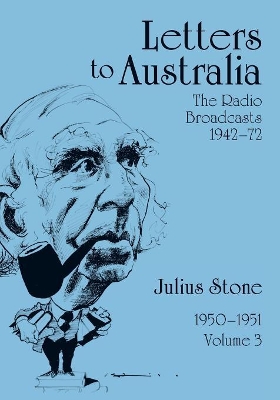 Originally broadcast by the ABC between 1942 and 1972 and re-discovered in 2006, these conversational opinion pieces by jurist Julius Stone take the reader back to the mid-20th century, bringing to life the people, events and the sweep of affairs during World War II and its turbulent aftermath.

More than anyone else at that time, Stone gave Australians a sense that they were part of the world and that they could - and - seek to influence world events. His broadcasts give a unique insight into Australia's changing sense of its place in the world during World War II and the postwar years, and of the hopes and fears of that era.

Julius Stone returned from overseas in early 1950 and quickly resumed broadcasting. Through 1950 and 1951, the issues that attracted his analysis were disarmament, the growth of McCarthyism in the United States, the formal division of Germany, and the war in Korea. The intervention of China, indoctrination, brainwashing and human rights raised by prisoners of the war are covered in many essays.

» Have you read this book? We'd like to know what you think about it - write a review about Letters to Australia, Volume 3: Essays from 1950-1951 book by Mr Julius Stone and you'll earn 50c in Boomerang Bucks loyalty dollars (you must be a Boomerang Books Account Holder - it's free to sign up and there are great benefits!)