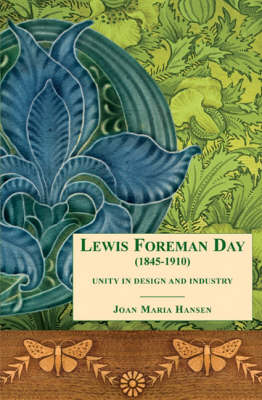 Unity in Design and Industry

Lewis Foreman Day (1845-1910) is one of the most neglected figures in late nineteenth-century design. In exploring Day's dual career as an industrial designer of extraordinary range and versatility and a major writer and critic, this well-illustrated book restores his place among the influential figures of his time Day's relationships with colleagues William Morris, Walter Crane, W.A.S. Benson and others situated him in the vortex of developments of design in Britain. Design historian Joan Maria Hansen examines Day's work as a prolific industrial designer whose mastery of pattern, colour, ornament and superb draughtsmanship resulted in tiles and art pottery, clocks and furniture, wallpapers, textiles, stained glass, and interiors of remarkable diversity and beauty. Day embraced modern technology. His views on the role of the designer for industry, along with his unshakable belief that a marriage of design and industrial processes was essential to produce beautiful furnishings for the majority of people, reveal him to be startlingly modern in his attitudes and practice in the changing world of industrial production. Today, collectors prize Lewis F. Day's clocks, furniture, tiles and art pottery, and books - which he both wrote and designed - and reproductions of his patterns for wallpapers and textiles are enjoyed by enthusiasts. Day's textbooks on design continue to influence designers, and his magazine journalism provides insightful and balanced commentary on developments in late nineteenth- and early twentieth-century design. This book - the very first full treatment of this major figure - is the definitive reference on Day's life and work and is an invaluable reference for collectors and dealers, decorative arts professionals, designers, business historians and enthusiasts of late nineteenth- and early twentieth-century design. The first book to be published on this leading figure whose career spanned the three major design movements of the time: the Aesthetic Movement, the Arts and Crafts Movement and Art Nouveau Based on a decade of original research by a recognised authority on 19th century design history Profusely illustrated throughout 260 colouer & 210 b/w illustrations

» Have you read this book? We'd like to know what you think about it - write a review about Lewis F Day (1845-1910) book by Joan Maria Hansen and you'll earn 50c in Boomerang Bucks loyalty dollars (you must be a Boomerang Books Account Holder - it's free to sign up and there are great benefits!)

Joan Maria Hansen is an independent scholar and design historian specialising in the design and marketing of 19th- and early 20th-century home furnishings in Britain and America.