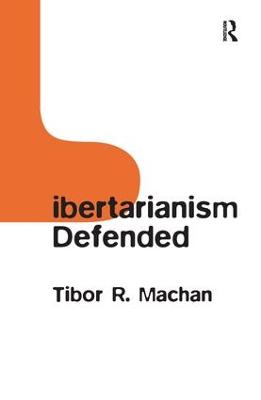 Ever since the publication in 1974 of Robert Nozick's Anarchy, State, and Utopia, libertarianism has been much discussed within political philosophy, science and economy circles. Yet libertarianism has been so strongly identified with Nozick's version of it that little attention has been devoted to other than Nozick's ideas and arguments. While Nozick's version of libertarianism has preoccupied the academic discussion Nozick himself did not respond to the many criticisms raised and yet other defenders of libertarianism have not remained silent. Jan Narveson, Loren Lomasky, Eric Mack, Douglas Rasmussen, Douglas Den Uyl and many others have contributed impressive arguments of their own in support of the libertarian idea that a political system is just when it successfully secures the rights of individuals understood within the Lockean classical liberal tradition. In this book Tibor R. Machan analyses the state of the debate on libertarianism post Nozick. Going far beyond the often cursory treatment of libertarianism in major books and other publications he examines closely the alternative non-Nozickian defenses of libertarianism that have been advanced and, by applying these arguments to innumerable policy areas in the field, Machan achieves a new visibility and prominence for libertarianism. » Have you read this book? We'd like to know what you think about it - write a review about Libertarianism Defended book by Tibor R. Machan and you'll earn 50c in Boomerang Bucks loyalty dollars (you must be a Boomerang Books Account Holder - it's free to sign up and there are great benefits!)

A Preview for this title is currently not available.
More Books By Tibor R. Machan
View All