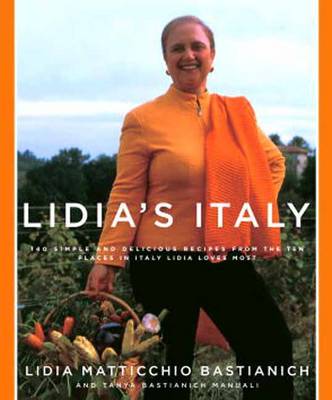 In this exciting new book the incomparable Lidia takes us on a gastronomic journey-from Piemonte to Puglia-exploring ten different regions that have informed her cooking and helped to make her the fabulous cook that she is today. In addition, her daughter Tanya, an art historian, guides us to some of the nearby cultural treasures that enrich the pursuit of good food. In Istria, now part of Croatia, where Lidia grew up, she forages again for wild asparagus, using it in a delicious soup and a frittata; Sauerkraut with Pork and Roast Goose with Mlinzi reflect the region's Middle European influences; and buzara, an old mariner's stew, draws on fish from the nearby sea. From Trieste, Lidia gives seafood from the Adriatic, Viennese-style breaded veal cutlets and Beef Goulash, and Sacher Torte and Apple Strudel. From Friuli, where cows graze on the rich tableland, comes Montasio cheese to make fricos; the corn fields yield polenta for Velvety Cornmeal-Spinach Soup. In Padova and Treviso rice reigns supreme, and Lidia discovers hearty soups and risottos that highlight local flavors. In Piemonte, the robust Barolo wine distinguishes a fork-tender stufato of beef; local white truffles with scrambled eggs is "heaven on a plate"; and a bagna cauda serves as a dip for local vegetables, including prized cardoons. In Maremma, where hunting and foraging are a way of life, earthy foods are mainstays, such as slow-cooked rabbit sauce for pasta or gnocchi and boar tenderloin with prune-apple Sauce, with Galloping Figs for dessert. In Rome Lidia revels in the fresh artichokes and fennel she finds in the Campo dei Fiori and brings back nine different ways of preparing them. In Naples she gathers unusual seafood recipes and a special way of making limoncello-soaked cakes. From Sicily's Palermo she brings back panelle, the delicious fried chickpea snack; a caponata of stewed summer vegetables; and the elegant Cannoli Napoleon. In Puglia, at Italy's heel, where durum wheat grows at its best, she makes some of the region's glorious pasta dishes and re-creates a splendid focaccia from Altamura.There are 140 delectable recipes to be found as you make this journey with Lidia. And along the way, with Tanya to guide you, you'll stop to admire Raphael's fresco Triumph of Galatea, a short walk from the market in Rome; the two enchanting women in the Palazzo Abbatellis in Palermo; and the Roman ruins in Friuli, among many other delights. There's something for everyone in this rich and satisfying book that will open up new horizons even to the most seasoned lover of Italy. 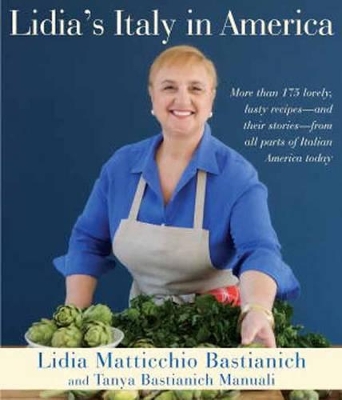 » Have you read this book? We'd like to know what you think about it - write a review about Lidia's Italy book by Lidia Matticchio Bastianich and you'll earn 50c in Boomerang Bucks loyalty dollars (you must be a Boomerang Books Account Holder - it's free to sign up and there are great benefits!)

Lidia Mattichio Bastianich is the author of four previous books, three of them accompanied by nationally syndicated public television series. She is the owner of the New York City restaurant Felidia (among others), and she lectures on and demonstrates Italian cooking throughout the country. She lives on Long Island, New York.Tanya Bastianich Manuali, Lidia's daughter, received her Ph.D. in Renaissance history from Oxford University. Since 1996 she has led food/wine/art tours. She lives with her husband and children on Long Island.

A Preview for this title is currently not available.
More Books By Lidia Matticchio Bastianich
View All