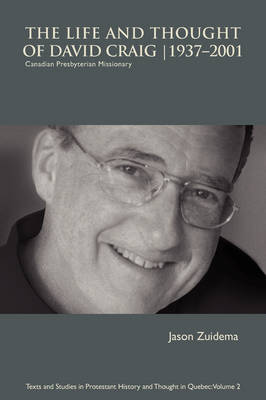 The Life and Thought of David Craig tells the story of one Canadian Presbyterian missionary whose life spanned more than six decades and three continents. From humble Ontario origins, David studied and served in several diverse languages and cultures. After a near death experience as a missionary in Nigeria, David became increasingly involved in French evangelism and Reformed theological education. Most significantly, from 1976 until his death in 2001, David served as a pastor in three successive French-speaking congregations in the province of Quebec. David's career evidences not only the emotions and adventure of one man, but the joys and challenges more generally experienced by Christian missionaries in the second half of the 20th century. JASON ZUIDEMA (Ph.D., McGill) is lecturer in Church History at Farel Reformed Theological Seminary and McGill University. He has written a number of articles and several books including the recently-released Peter Martyr Vermigli (1499-1562) and the Outward Instruments of Divine Grace (Vandenhoeck & Ruprect). He is an ordained minister in the Eglise reformee du Quebec and resides with his wife and two children in Repentigny, Quebec.

» Have you read this book? We'd like to know what you think about it - write a review about Life and Thought of David Craig (1937-2001) book by Jason Zuidema and you'll earn 50c in Boomerang Bucks loyalty dollars (you must be a Boomerang Books Account Holder - it's free to sign up and there are great benefits!)


A Preview for this title is currently not available.
More Books By Jason Zuidema
View All