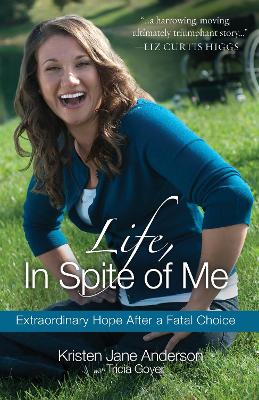 Life, in Spite of Me

Extraordinary Hope After a Fatal Choice

Description - Life, in Spite of Me by Kristen Jane Anderson

Kristen Anderson didn't really want to die, but she couldn't cope with the emotional pain that life had brought her. Once a happy child, her world darkened after four teen friends and her grandmother died within two years. While reeling from these losses, Kristen was raped by a trusted friend. She sank deeper into depression. Kristen was seventeen years old the January night she lay across the railroad tracks not far from her parents' home. Before the engineer could bring the train to a stop, thirty-three freight train cars passed over her at 55 miles-per-hour. It was only after the train stopped that Kristen realized she was still alive. And after looking around, trying to figure out if she was just caught up in a horrible dream, she saw her legs about ten feet away. Intense pain set in. She was alive, and a living nightmare had just begun. Several years have passed since the night Kristen Anderson should have died. This young woman knows her survival is a miracle, yet her amputated legs are a daily reminder of the night she'd hoped to end her pain. The night she thought she'd go to heaven. Instead of death by suicide, God had a different story for her.
In Life, in Spite of Me, Kristen shares her journey from despair to hope, from wanting to die to having a purpose for living. Though she struggled intensely with depression and suicidal thoughts after losing her legs, she ultimately found lasting hope, joy, and fulfillment in knowing and serving God.

Book Reviews - Life, in Spite of Me by Kristen Jane Anderson

» Have you read this book? We'd like to know what you think about it - write a review about Life, in Spite of Me book by Kristen Jane Anderson and you'll earn 50c in Boomerang Bucks loyalty dollars (you must be a Boomerang Books Account Holder - it's free to sign up and there are great benefits!)

Kristen Jane Andersonhas been featured onOprahand is a popular speaker at colleges, womenrsquo;s and youth events, churches, and suicide prevention outreaches. A graduate of Moody Bible Institute and the founder of Reaching You Ministries, Kristen seeks to help those who are hurting, hopeless, lost, suicidal and depressed. Tricia Goyeris the author of three hundred articles for national periodicals, as well as fourteen novels and six nonfiction books, includingBlue Like Play Dough. From the Hardcover edition.