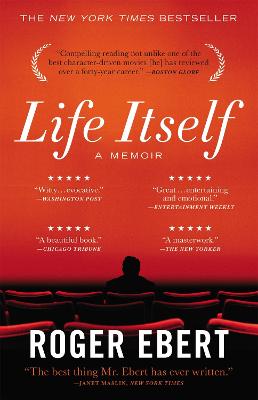 Description - Life Itself by Roger Ebert

Roger Ebert is the best-known film critic of our time. He has been reviewing films for the Chicago Sun-Times since 1967 and was the first film critic ever to win a Pulitzer Prize. He has appeared on television for four decades, including twenty-three years as cohost of Siskel and Ebert at the Movies.In 2006, complications from thyroid cancer treatment resulted in the loss of his ability to eat, drink, or speak. But with the loss of his voice, Ebert has only become a more prolific and influential writer. And now, for the first time, he tells the full, dramatic story of his life and career.Roger Ebert's journalism carried him on a path far from his nearly idyllic childhood in Urbana, Illinois. It is a journey that began as a reporter for his local daily and took him to Chicago, where he was unexpectedly given the job of film critic for the Sun-Times, launching a lifetime's adventures.In this candid, personal history, Ebert chronicles it all: his loves, losses and obsessions; his struggle and recovery from alcoholism; his marriage; his politics; and his spiritual beliefs. He writes about his years at the Sun-Times, his colorful newspaper friends and his life-changing collaboration with Gene Siskel. He remembers his friendships with Studs Terkel, Mike Royko, Oprah Winfrey and Russ Meyer (for whom he wrote Beyond the Valley of the Dolls and an ill-fated Sex Pistols movie). He shares his insights into movie stars and directors like John Wayne, Werner Herzog and Martin Scorsese.This is a story that only Roger Ebert could tell. Filled with the same deep insight, dry wit and sharp observations that his readers have long cherished, this is more than a memoir-it is a singular, warm-hearted, inspiring look at life itself.'I believe that if, at the end, according to our abilities, we have done something to make others a little happier, and something to make ourselves a little happier, that is about the best we can do. To make others less happy is a crime. To make ourselves unhappy is where all crime starts. We must try to contribute joy to the world. That is true no matter what our problems, our health, our circumstances. We must try. I didn't always know this, and am happy I lived long enough to find it out.' - from LIFE ITSELF.

» Have you read this book? We'd like to know what you think about it - write a review about Life Itself book by Roger Ebert and you'll earn 50c in Boomerang Bucks loyalty dollars (you must be a Boomerang Books Account Holder - it's free to sign up and there are great benefits!)

Roger Ebert won the Pulitzer Prize for criticism in 1975, and his reviews are syndicated in newspapers around the world. He was cohost of Siskel & Ebert and Ebert & Roeper for thirty-three years, and is now managing editor and reviewer for Ebert Presents At the Movies. He is the author of seventeen books, including Scorsese by Ebert and Awake in the Dark. Roger Ebert is also an honorary member of the Directors Guild of America. He received the Carl Sandburg Literary Award of the Chicago Public Library and won the Webby Awards Person of the Year in 2010. His website, rogerebert.com, receives 110 million visits a year. He lives with his wife, Chaz Hammelsmith Ebert, in Chicago.