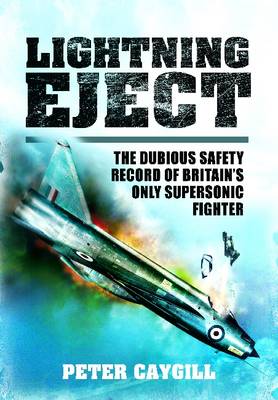 The Dubious Safety Record of Britain's Only Supersonic Fighter

The English Electric Lightning entered RAF squadron service in 1960 and continued flying in the interceptor role until 1988. It had a stunning world-beating performance with a top speed in excess of Mach 2 and a climb rate that would take it to 40,000 feet in a little over 3 minutes. The aircraft's safety record, however, left much to be desired. During a period in the early 1970s the attrition rate was the loss of a Lightning every month. There was a six per cent chance of a pilot experiencing an engine fire and a one in four chance that he would not survive. This book looks at Lightning accidents and incidents in chronological order using the official accident reports, Board of Enquirey findings and first-hand accounts from pilots. It puts the reader very much 'in the cockpit'. SELLING POINTS: Aviation buff's enthusiasm for Lightning literature Hitherto untold stories of dramatic crashes and incidents A superb companion volume to the successful Lightning from the Cockpit ILLUSTRATIONS: 60 mono in plates

» Have you read this book? We'd like to know what you think about it - write a review about Lightning Eject book by Peter Caygill and you'll earn 50c in Boomerang Bucks loyalty dollars (you must be a Boomerang Books Account Holder - it's free to sign up and there are great benefits!)


A Preview for this title is currently not available.
More Books By Peter Caygill
View All