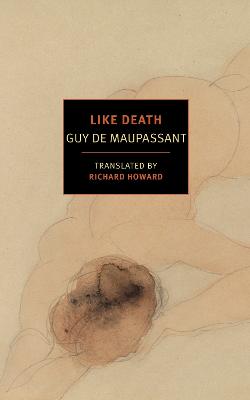 Olivier Bertin is at the height of his career as a painter. After making his name with his Cleopatra, he went on to establish himself as othe chosen painter of the Parisiennes, the most adroit and ingenious artist to reveal their grace, their figures, and their souls.o And though his hair may be white, he remains a handsome, vigorous, and engaging bachelor, a prized guest at every table and salon. Anne, the comtesse de Guilleroy, is a youthful forty, the wife of a busy politician. The painter and the comtesse have been lovers for many years. Anne's daughter, Annette-the spitting image of her mother in her lovely youth-has finished her schooling and is returning to Paris. Her parents are putting together an excellent match. Everything is as it should be-until the painter and comtesse are each seized by an agonizing suspicion, like death... In its devastating depiction of the treacherous nature of love, Like Death is more than the equal of Swann's Way. Richard Howard's new translation brings out all the penetration and poetry of this masterpiece of nineteenth-century fiction.

» Have you read this book? We'd like to know what you think about it - write a review about Like Death book by Guy De Maupassant and you'll earn 50c in Boomerang Bucks loyalty dollars (you must be a Boomerang Books Account Holder - it's free to sign up and there are great benefits!)

Guy de Maupassant (1850-1893), journalist, novelist, poet, memoirist, playwright, and short-story writer, was one of the most notable men of letters of nineteenth-century France. He was born in Normandy to a middle-class family that had adopted the noble odeo prefix only a generation earlier. An indifferent student, Maupassant enlisted in the army during the Franco-Prussian war-staying only long enough to acquire an intense dislike for all things military-and then went on to a career as a civil servant. His entrUe into the literary world was eased by Gustave Flaubert, who had been a childhood playmate of his mother's and who took the young man under his wing, introducing him into salon society. The bulk of Maupassant's published works, including nearly three hundred short stories and six novels, were written between 1880 and 1890, a period in which he also contributed to several Parisian daily newspapers. Among his best-known works are the novelsaBel-AmiaandaPierre and Jeanaand the fantastic taleaLa Horla; above all, he is celebrated for his stories, which transformed and defined the genre for years. In 1892, after attempting suicide to escape the hallucinations and headaches brought on by syphilis, Maupassant was committed to an asylum. He died eighteen months later. Richard Howard is the author of seventeen volumes of poetry and has published more than one hundred fifty translations from the French, including, for NYRB, Marc Fumaroli'saWhen the World Spoke French, Balzac'saUnknown Masterpiece, and Maupassant'saAlien Hearts. He has received a National Book Award for his translation ofaLes Fleurs du Malaand a Pulitzer Prize foraUntitled Subjects, a collection of poetry. His most recent book of poems,

A Preview for this title is currently not available.
More Books By Guy De Maupassant
View All

Mademoiselle Perle and Other Stories (riverrun editions): a new selection of the sharp, sensitive and much-revered stories
$19.54 $22.99