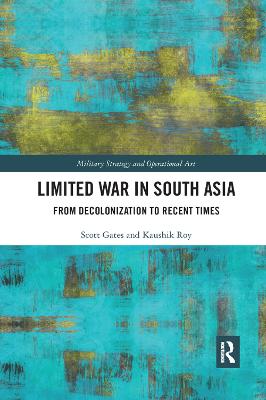 Limited War in South Asia: From Decolonization to Recent Times

This book examines the origins, courses and consequences of conventional wars in post-colonial South Asia.

Although South Asia has experienced large-scale conventional warfare on several occasions since the end of World War II, there is an almost total neglect of analysis of conventional warfare in the Indian subcontinent. Focusing on China, India and Pakistan, this volume, therefore, takes a unique approach. Regional rivalries between India and Pakistan are linked with global rivalries between the US and USSR (later Russia) and then China, and war is defined in a broader perspective. The book analyses the conduct of land, sea and air warfare, as well as the causes and consequences of conflicts. Tactical conduct of warfare (the nature of mobile armoured strikes and static linear infantry combat supported by heavy artillery) and generalship are studied along with military strategy, doctrine and grand strategy (national security policy), which is an amalgam of diplomacy, military strategy and economic policy. While following a realpolitik approach, this book blends the development of military strategies and doctrines with the religious and cultural ethos of the subcontinent's inhabitants. Drawing on sources not easily accessible to Western scholars, the overall argument put forward by this work is that conventional warfare has been limited in South Asia from the very beginning for reasons both cultural and realpolitik.

This book will be of much interest to students of South Asian politics, security studies, war and conflict studies, military studies and International Relations in general.

Other Editions - Limited War in South Asia: From Decolonization to Recent Times by Scott Gates » Have you read this book? We'd like to know what you think about it - write a review about Limited War in South Asia: From Decolonization to Recent Times book by Scott Gates and you'll earn 50c in Boomerang Bucks loyalty dollars (you must be a Boomerang Books Account Holder - it's free to sign up and there are great benefits!)


A Preview for this title is currently not available.
More Books By Scott Gates
View All