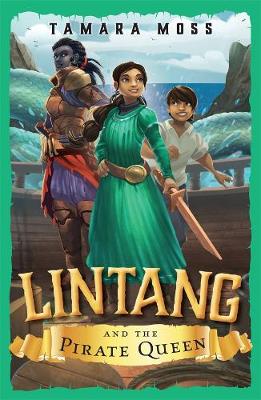 Lintang and the Pirate Queen

Description - Lintang and the Pirate Queen by Tamara Moss

Lintang dreams of having adventures on the high seas.

When a deadly mythie attacks the same day the infamous Captain Shafira visits her island, Lintang gets her chance, defending her village with a bravery that earns her a place on the pirate queen's ship.

But they've barely left the island when Lintang discovers her best friend, Bayani, has stowed away. Telling Captain Shafira means betraying her friend, but keeping Bayani's secret risks everything . . . including their lives.

'A wonderful book with deliciously unexpected twists and turns, and the best pirate queen ever!' Lian Tanner, bestselling author of THE KEEPERS

'Combine a pirate adventure of mythic proportions, a uniquely charming cast of characters, and a vivid new fantasy world and you get Lintang and the Pirate Queen. Magical, inventive, and positively unforgettable.' Marissa Meyer, #1 New York Times bestselling author of THE LUNAR CHRONICLES

'Tamara Moss has created a rich and diverse world full of memorable characters and magical creatures. A delight to read.' Claire Fayers, author of THE ACCIDENTAL PIRATES

Book Reviews - Lintang and the Pirate Queen by Tamara Moss

» Have you read this book? We'd like to know what you think about it - write a review about Lintang and the Pirate Queen book by Tamara Moss and you'll earn 50c in Boomerang Bucks loyalty dollars (you must be a Boomerang Books Account Holder - it's free to sign up and there are great benefits!)

West Australian author Tamara Moss has been writing seriously for over a decade. After majoring in Asian Studies at the University of Western Australia, Tamara has taught Japanese, interned at indie publisher Twelfth Planet Press, and worked at many different schools. She is currently teaching upper primary. Lintang and the Pirate Queen is Tamara's first novel and she is working on the second and third books in the series.

The Skeleton Coast: Quest of the Sunfish 3
Mardi McConnochie
$11.99 $14.99
More Books By Tamara Moss
View All