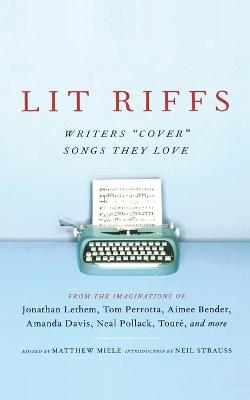 Not since the dawn of the music video has pop music undergone a pioneering effort as exciting as this. In LIT RIFFS, America's latest generation of celebrated storytellers joins a list of the most world-renowned rock critics in composing a unique anthology. The anthology consists of fiction, non-fiction, and free-form riffs based on the writer's reaction to the songs that have inspired us all. The book features contributions from Dave Eggers, Jonathan Lethem, Jennifer Belle, Lisa Tucker, Greil Marcus, Rebecca Wells, Nelson George and many more. This is the first book with it's own soundtrack and readers will be able to listen to it, thanks to a CD from Manhattan Records that will be distributed simultaneously. Taking both the written word and the sung lyric to new places, LIT RIFFS is a revolutionary medium from some of today's most influential young talents.

» Have you read this book? We'd like to know what you think about it - write a review about Lit Riffs book by Jonathan Lethem and you'll earn 50c in Boomerang Bucks loyalty dollars (you must be a Boomerang Books Account Holder - it's free to sign up and there are great benefits!)

Tom Perrotta is the bestselling author of eight works of fiction, including Election and Little Children, both of which were made into critically acclaimed movies, and The Leftovers, which was adapted into an HBO series. He lives outside Boston. Toure is a cohost of MSNBC's The Cycle and a columnist for Time.com. He is the author of four books, including Who's Afraid of Post-Blackness?, a New York Times and Washington Post notable book, and I Would Die 4 U: Why Prince Became an Icon. He lives in Brooklyn. Matthew Miele created and developed the idea for Lit Riffs in order to reinvent the musical experience through literature. While a literary agent with John Hawkins & Associates, Inc., he handpicked the hippest and most celebrated storytellers of our time to imaginatively compose stories inspired by songs. Prior to his publishing career, Miele wrote and directed the feature film Everything's Jake -- due for release in fall 2004, starring Ernie Hudson, Graeme Malcolm, Debbie Allen, Robin Givens, and Lou Rawls -- and was a sound designer/music composer for film and television. Miele recently founded and is current host of the Manhattan Concert Club (MCC), a subscription-based, ten-concert series presenting intimate, acoustic performances by the world's most renowned recording artists in a wide variety of Manhattan's most unique and treasured settings. Miele hopes that every MCC Concert will reflect to true music enthusiasts what the inception of the "Lit Riff" and this groundbreaking collection ultimately will reflect as well -- a renewed celebration of and appreciation for great music. Neil Strauss is an award-winning Rolling Stone editor, New York Times columnist, and writer/cowriter of eight New York Times bestselling books including The Game and The Truth.