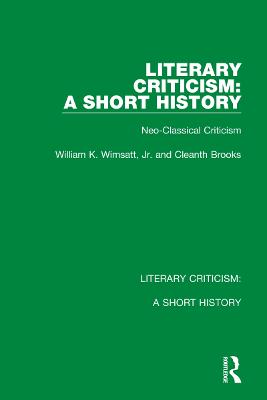 First published in 1957, Literary Criticism: A Short History traces our aesthetic heritage from its classical origins up to the contemporary state of criticism in the English-speaking world.

Divided into four volumes, each book adopts a fair and objective position in the presentation of various critical positions, and each critical theory is considered not only in competition with other critical theories, but also in vital dialectic with the creative literature of its own time.

» Have you read this book? We'd like to know what you think about it - write a review about Literary Criticism: A Short History: Neo-Classical Criticism book by William K. Wimsatt, Jr. and you'll earn 50c in Boomerang Bucks loyalty dollars (you must be a Boomerang Books Account Holder - it's free to sign up and there are great benefits!)


A Preview for this title is currently not available.
More Books By William K. Wimsatt, Jr.
View All