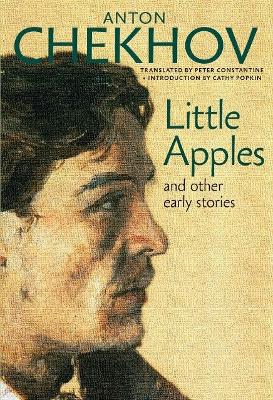 And Other Early Stories

In the follow-up to his National Translation Award-winning collection The Undiscovered Chekhov, translator and scholar Peter Constantine brings us more little-known work from the legendary author's early days as a magazine writer, pseudonymously turning out pieces for Russia's small middle class. These stories are fresh, yet mature, snapshots of the style with which Chekhov would come to be associated, both uproariously tragic and darkly comic, and lit from within by a deep fellow feeling for all of humanity. As his readers have come expect, Constantine has translated this work with a masterly command of both languages' subtleties, capturing the shadings and intricacies of Chekhov's writing that flash and recede like sunlight on an orchard, offering Chekhov's tough and amused perspectives on daily phenomena like love, aging, class, and work. With moments that seem to presage the most contemporary writing, Chekhov's Little Apples reveals one of the world's greatest writers as we have rarely seen him, an author both deeply of his times and far ahead of them. » Have you read this book? We'd like to know what you think about it - write a review about Little Apples book by Anton Chekhov and you'll earn 50c in Boomerang Bucks loyalty dollars (you must be a Boomerang Books Account Holder - it's free to sign up and there are great benefits!)

ANTON CHEKHOV (1860-1904) is regarded as one of the world's modern masters of both the play and the short story. PETER CONSTANTINE's recent translations include The Essential Writings of Rousseau (Modern Library), The Essential Writings of Machiavelli (Modern Library), Sophocles' Theban Trilogy (Barnes and Noble Classics), and works by Gogol, Dostoevsky, Tolstoy, and Voltaire. His translation of the complete works of Isaac Babel for W. W. Norton received the Koret Jewish Literature Award and a National Jewish Book Award citation. He has been a Guggenheim Fellow, and was awarded the PEN Translation Prize for Six Early Stories by Thomas Mann. He co-edited A Century of Greek Poetry- 1900-2000, and the anthology The Greek Poets- Homer to the Present, which W. W. Norton published in 2010. He is currently a fellow in Greek/Classics at Columbia.