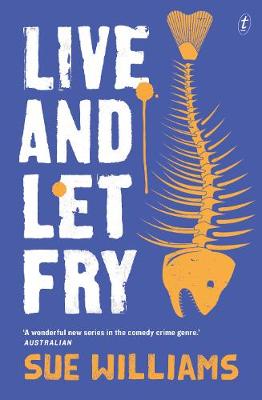 For Cass Tuplin, proprietor of the Rusty Bore Takeaway (and definitely not an unlicensed private investigator), it's weird enough that her neighbour Vern's somehow acquired a lady friend. But then he asks Cass to look into the case of the dead rats someone's dumped on Joanne's doorstep.

She's barely started when Joanne goes missing, leaving hints of an unsavoury past. Then a private investigator from Melbourne turns up asking questions about Joanne's involvement in a fatal house fire - and before you can say 'unauthorised investigation' Cass is back on the case.

» Have you read this book? We'd like to know what you think about it - write a review about Live and Let Fry: A Rusty Bore Mystery book by Sue Williams and you'll earn 50c in Boomerang Bucks loyalty dollars (you must be a Boomerang Books Account Holder - it's free to sign up and there are great benefits!)

5 big stars Live and Let Fry is the third book in the Cass Tuplin murder mystery series by Australian science and travel writer, chartered accountant, marine biologist and author, Sue Williams. It is set around a year after Dead Men Don’t Order Flake but there is enough recap of essential facts that it can easily be read as a stand-alone. Of course, the pleasure of reading this third installment is enhanced by the familiarity with the regular characters that reading earlier books in the series affords.

Vern Casey, owner of Rusty Bore’s General Store, has come to Cass for help. He’s worried about his girlfriend, Joanne Smith, owner of Hustle’s Book Bonanza, after he finds twelve mutilated rat corpses on her doorstep. Against her better judgement (and her son Dean’s express directive, because she is NOT, repeat NOT, a licenced private investigator), she agrees to help. Cass meets with this nervous-looking lady, but before Cass learns much, Joanne disappears, and it seems many people are looking for her in connection with a fatal house fire.

Once again, Williams gives the reader a lively tale of murder, arson, accidental death, endangered bird species, ferrets (always ferrets!) and take away food. Williams captures small town Victoria with ease. Her plot has enough twists and red herrings to keep it interesting, and reaches an exciting, flame-filled climax that will add another dimension to Cass’s already fiery nightmares. As well as a cast of quirky characters, the novel features dodgy developers, crooked consultants, corrupt councillors, a security guard who eschews the use of force, an anti-gambling campaigner, and an intruder with an apparent neatness fetish.

In the course of her investigation, Cass attends a funeral, discovers a dead body, poses as an ASIC representative, goes bird-watching, locks a suspect in a toilet, is beaten, slashed, knocked out and robbed, is stitched up, and escorts a friend to the Opera. However, Cass is, at times, distracted by hints of trouble in paradise with both sons’ relationships, the continued absence of her lover as he toils for MSF in Bolivia, and the charms of a certain helicopter pilot.

Readers of the series will know by now that Cass has a wild imagination that leads her to jump to (often erroneous) conclusions on a bare minimum of facts, causing embarrassment and irritation to one son and engendering concern for her welfare in both.

This is a book best not read on the quiet carriage of public transport, as the giggles, snickers and guffaws likely to be emitted may disturb other commuters. Once again, a great cover by W.H.Chong encloses this brilliant piece of crime comedy. Fans of the series will not be disappointed and will, doubtless, be pleased that Williams is working on a fourth Cass Tuplin book. Recommended.

Sue Williams is the author of a crime series set in Rusty Bore, population 147. Sue was raised in country Victoria and hotly denies this provided any inspiration for her writing. She is a science and travel writer and a chartered accountant who also holds a PhD in marine biology. These days, Sue lives in Melbourne with her husband. Her previous two Cass Tuplin books are Murder with the Lot and Dead Men Don't Order Flake.

A Preview for this title is currently not available.
More Books By Sue Williams
View All