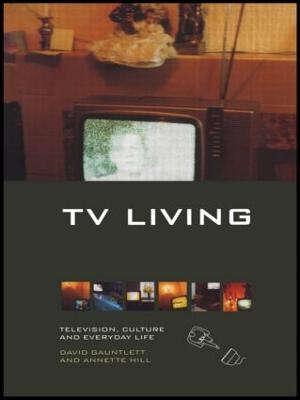 TV Living presents the findings of a British Film Institute project in which 500 participants completed detailed questionnaire-diaries over a five year period, writing some three and a half million words on their lives, their television watching, and the relationship between the two. Gauntlett and Hill use this extensive data to explore some of the most fundamental questions in media and cultural studies, focussing on issues of gender, identity, the impact of new technologies, and life changes. Opening up new areas of debate, the study sheds new light on audiences and their responses to issues such as sex and violence on television. The structure of the study enables the authors to track individual respondents changing attitudes as they approach the new media age and experience personal life changes of their own.
Each chapter addresses a major contemporary themes in media studies: how families negotiate viewing choices, the impact of new technologies such as video, satellite and cable, how young people make the transition to adult' programming, viewer's often guilty or ambivalent feelings about watching television, and audience responses or representations of women, disability, and violence. A unique study of contemporary tv audience behaviour and attitudes, TV Living offers a fascinating insight into the complex relationship between mass media and people's lives today. » Have you read this book? We'd like to know what you think about it - write a review about Living Television book by David Gauntlett and you'll earn 50c in Boomerang Bucks loyalty dollars (you must be a Boomerang Books Account Holder - it's free to sign up and there are great benefits!)

David Gauntlett is Lecturer in Social Communications at the Institute of Communications Studies, University of Leeds. He is the author of Moving Experiences: Understanding Television's Influences and Effects and Video Critical: Children, The Environment and Media Power, and edits the website www.theory.org.uk. Annette Hill is Senior Lecturer in Mass Media at the Centre for Communication and and Information Studies, University of Westminister. She is the author of Shocking Entertainment: Viewer Response to Violent Movies and is editor of the journal Framework.

A Preview for this title is currently not available.
More Books By David Gauntlett
View All