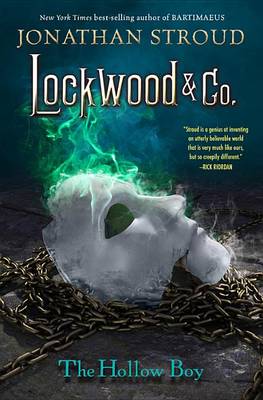 As a massive outbreak of supernatural Visitors baffles Scotland Yard and causes protests throughout London, Lockwood & Co. continue to demonstrate their effectiveness in exterminating spirits. Anthony Lockwood is dashing, George insightful, and Lucy dynamic, while the skull in the jar utters sardonic advice from the sidelines. There is a new spirit of openness in the team now that Lockwood has shared some of his childhood secrets, and Lucy is feeling more and more as if her true home is at Portland Row. It comes as a great shock, then, when Lockwood and George introduce her to an annoyingly perky and hyper-efficient new assistant, Holly Munro. Meanwhile, there are reports of many new hauntings, including a house where bloody footprints are appearing, and a department store full of strange sounds and shadowy figures. But ghosts seem to be the least of Lockwood & Co.'s concerns when assassins attack during a carnival in the center of the city. Can the team get past their personal issues to save the day on all fronts, or will bad feelings attract yet more trouble? Danger abounds, tensions escalate, and new loyalties form in this third delightfully terrifying adventure in the critically acclaimed Lockwood & Co. series. Praise for The Screaming Staircase"This story will keep you reading late into the night, but you'll want to leave the lights on. Stroud is a genius at inventing an utterly believable world which is very much like ours, but so creepily different. Put The Screaming Staircase on your 'need to read' list!" -Rick Riordan "A pleasure from tip to tail, this is the book you hand the advanced readers that claim they'd rather read Paradise Lost than Harry Potter. Smart as a whip, funny, witty, and honestly frightening at times, Stroud lets loose and gives readers exactly what they want. Ghosts, kids on their own without adult supervision, and loads of delicious cookies." -Elizabeth Bird, School Library Journal "Stroud shows his customary flair for blending deadpan humor with thrilling action, and the fiery interplay among the three agents of Lockwood & Co. invigorates the story (along with no shortage of creepy moments)." -Publishers Weekly Praise for The Whispering Skull *"An occult portal and its spectral guardian nearly cut short the careers of three rising young ghost hunters in this madcap sequel to The Screaming Staircase (2013). For all their internecine squabbling, the three protagonists make a redoubtable team-and their supporting cast, led by the sneering titular skull in a jar, adds color and complications aplenty. Rousing adventures for young tomb robbers and delves into realms better left to the dead." -Kirkus Reviews (starred review) *"Stroud writes with a fine ear for dialog, a wry sense of humor, and a knack for describing haunted places. Creating tension that ebbs and flows, he slowly builds the dramatic narrative to a resounding crescendo, and he makes the quieter scenes that follow just as compelling." -Booklist (starred review) 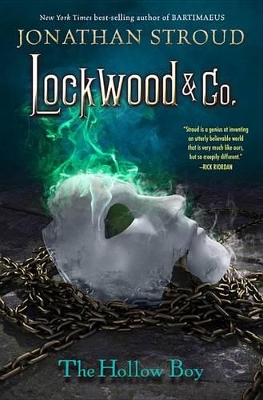 » Have you read this book? We'd like to know what you think about it - write a review about Lockwood & Co. Book Three the Hollow Boy book by Jonathan Stroud and you'll earn 50c in Boomerang Bucks loyalty dollars (you must be a Boomerang Books Account Holder - it's free to sign up and there are great benefits!)

Jonathan Stroud (www.jonathanstroud.com) is the author of two previous books in the Lockwood & Co. series as well as the New York Times best-selling Bartimaeus books, and the stand-alone titles Heroes of the Valley, The Leap, The Last Siege, and Buried Fire. He lives in England with his wife and two children.

A Preview for this title is currently not available.
More Books By Jonathan Stroud
View All