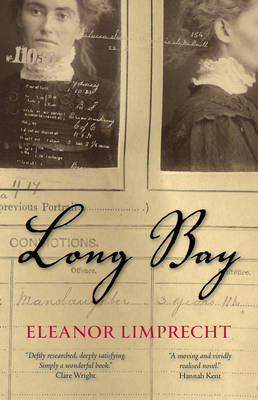 Set in Sydney in the first decade of the 1900s, Long Bay is based on the true case of a young female abortionist who was convicted of manslaughter and served out her sentence in the newly opened Long Bay Women's Reformatory - the first of its kind in Australia. The woman, Rebecca Sinclair, was pregnant when she went to prison.

Long Bay looks at how Rebecca became involved in the burgeoning illegal abortion racket in Edwardian-era Sydney and how she was drawn into Donald Sinclair's underworld. In unadorned prose, it examines the limiting effects of poverty, the mistakes we make for love, and the bond between mother and child.

» Have you read this book? We'd like to know what you think about it - write a review about Long Bay book by Eleanor Limprecht and you'll earn 50c in Boomerang Bucks loyalty dollars (you must be a Boomerang Books Account Holder - it's free to sign up and there are great benefits!)

Eleanor Limprecht was born in Washington DC in 1977 and grew up in the United States, Germany and Pakistan. She now lives in Sydney, where she is studying for a Doctorate of Creative Arts at UTS. Her journalism and book reviews have appeared in the Sydney Morning Herald, The Age, The Australian and The Sun-Herald. Her first novel, What Was Left, was published by Sleepers in 2013 to much critical acclaim, and shortlisted for the ALS Gold Medal 2014.

A Preview for this title is currently not available.
More Books By Eleanor Limprecht
View All