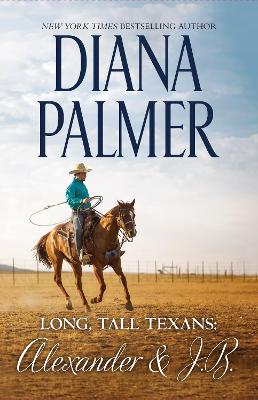 Ever since DEA agent Alexander Cobb gave Jodie Clayburn a Texas-size brush-off, they've been sworn enemies. When he pushed Jodie out of his life, he told himself he was doing the right thing. But eight years later, this cynical long, tall Texan can't believe the baby-faced schoolgirl has turned into such a beauty. Or that he'd have to beg her to help him crack a drug-smuggling case that threatens Jacobsville.

Tantalised to the core, Alexander would risk everything to protect her. In a hot pursuit, the two are drawn closer together. Will the man in control finally get caught in his own web of danger...and desire?

Wealthy Texas cattle rancher J. B. Hammock was proud of his reputation as a heartbreaker. He treated his women well, but they all knew they would never have a permanent status in his life - all but one. Innocent Tellie Maddox had been just a girl when she'd been orphaned and had come to live with his family. She was fiercely devoted to J.B., but when that devotion turned into something passionate between them, J.B. knew he had to break yet another heart.

Tellie hated him for that - until she lost her memory in an accident. Now all she remembered was the closeness she and J.B. once shared. He didn't want to hurt her all over again, but it quickly became clear that there was too much fire between him and Tellie for them to ever just be friends. And the deeper their feelings grew, the more J.B. feared the inevitable return of Tellie's memory...

» Have you read this book? We'd like to know what you think about it - write a review about Long, Tall Texans - Alexander & J.B. book by Diana Palmer and you'll earn 50c in Boomerang Bucks loyalty dollars (you must be a Boomerang Books Account Holder - it's free to sign up and there are great benefits!)