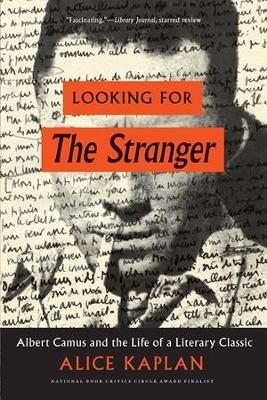 Looking for the Stranger

Albert Camus and the Life of a Literary Classic

Description - Looking for the Stranger by Alice Kaplan

The Stranger is a rite of passage for readers around the world. Since its publication in France in 1942, Camus's novel has been translated into sixty languages and sold more than six million copies. It's the rare novel that's as at likely to be found in a teen's backpack as in a graduate philosophy seminar. If the twentieth century produced a novel that could be called ubiquitous, The Stranger is it.

How did a young man in his twenties who had never written a novel turn out a masterpiece that still grips readers more than seventy years later? With Looking for "The Stranger", Alice Kaplan tells that story. In the process, she reveals Camus's achievement to have been even more impressive-and more unlikely-than even his most devoted readers knew.

Born in poverty in colonial Algeria, Camus started out as a journalist covering the criminal courts. The murder trials he attended, Kaplan shows, would be a major influence on the development and themes of The Stranger. She follows Camus to France, and, making deft use of his diaries and letters, re-creates his lonely struggle with the novel in Montmartre, where he finally hit upon the unforgettable first-person voice that enabled him to break through and complete The Stranger.

Even then, the book's publication was far from certain. France was straining under German occupation, Camus's closest mentor was unsure of the book's merit, and Camus himself was suffering from near-fatal tuberculosis. Yet the book did appear, thanks in part to a resourceful publisher, Gaston Gallimard, who was undeterred by paper shortages and Nazi censorship.

The initial critical reception of The Stranger was mixed, and it wasn't until after liberation that The Stranger began its meteoric rise. As France and the rest of the world began to move out of the shadow of war, Kaplan shows, Camus's book- with the help of an aggressive marketing campaign by Knopf for their 1946 publication of the first English translation-became a critical and commercial success, and Camus found himself one of the most famous writers in the world. Suddenly, his seemingly modest tale of alienation was being seen for what it really was: a powerful parable of the absurd, an existentialist masterpiece.

Few books inspire devotion and excitement the way The Stranger does. And it couldn't have a better biographer than Alice Kaplan, whose books about twentieth-century French culture and history have won her legions of fans. No reader of Camus will want to miss this brilliant exploration.

Other Editions - Looking for the Stranger by Alice Kaplan Book Reviews - Looking for the Stranger by Alice Kaplan

» Have you read this book? We'd like to know what you think about it - write a review about Looking for the Stranger book by Alice Kaplan and you'll earn 50c in Boomerang Bucks loyalty dollars (you must be a Boomerang Books Account Holder - it's free to sign up and there are great benefits!)

Alice Kaplan is the author of numerous books, including Dreaming in French, The Interpreter, French Lessons, and The Collaborator, the last of which was a finalist for the National Book Award.

A Preview for this title is currently not available.
More Books By Alice Kaplan
View All