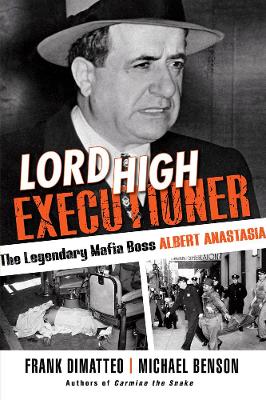 Umberto "Albert" Anastasia was born in Italy at the turn of the century. Five decades later, he would be gunned down in a barber shop in New York City. What happened in the years in between-and why every crime family had reason to want him dead-is one of the most brutal and fascinating stories in the history of American organized crime. This in-depth account of the man who became one of the most powerful and homicidal crime bosses of the twentieth century from Mafia insider Frank Dimatteo is the first full-length book to chronicle Anastasia's bloody rise from fresh-off-the-boat immigrant to founder of the notorious killer's club Murder, Inc.-featuring never-before-told accounts from those who feared him most . . .

They called him "The One Man Army." "Mad Hatter." "Lord High Executioner." Albert Anastasia came to America mean and became a prolific killer. His merciless assassination of Mafia godfather Vincent Mangano is recounted here in chilling first-hand detail. He set the record- the first man in the history of American justice to be charged with four separate murders-and walk free after each one. But in the end, he was the last obstacle in rival Mafia hoodlum Vito Genovese's dream of becoming the boss of bosses-and paid the ultimate price . . .

» Have you read this book? We'd like to know what you think about it - write a review about Lord High Executioner book by Frank Dimatteo and you'll earn 50c in Boomerang Bucks loyalty dollars (you must be a Boomerang Books Account Holder - it's free to sign up and there are great benefits!)


A Preview for this title is currently not available.
More Books By Frank Dimatteo
View All