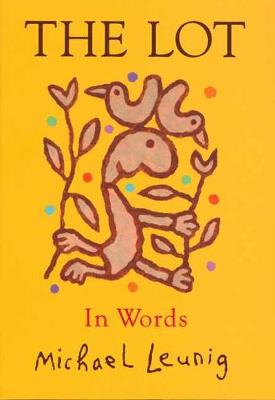 The Lot: In Words

Description - The Lot: In Words by Michael Leunig

Musings from a truly original thinker on eveything under the sun and many things over the moon. There are few aspects of existence to which Michael Leunig has not turned his renaissance mind, as a bemused and committed member of the human plight. From his cartoonist's sensibilities comes a peculiar journalism made of parable, memoir and soliloquy, on subjects ranging from the sublime to the subhuman. From the fragile ecosystem of the spirit to the brutalisation of the modern world. From the joy of primal epiphanies to the wretchedness of the violence we unwittingly commit against each other and our deeper selves each day. To hypocrisy and dispair in the political order. Military madness and the media. To violins, artists and newborn facials. The value of the mundane. Emotional mysteries and the night sky. Light and darkness in the national character. The wisdom of the innocent. The sadness of the brain-ridden. Humanity's redeeming pathos and our exquisite inseparabilitiy from the natural world. . . The lot. Even in the smallest, simplest things, Leunig finds the eternal key. And no matter how confronting the topic, he awakens and upholds the funny side. The uplifting side. The side you'd forgotten about - or didn't realise was there.

Book Reviews - The Lot: In Words by Michael Leunig

» Have you read this book? We'd like to know what you think about it - write a review about Lot: In Words book by Michael Leunig and you'll earn 50c in Boomerang Bucks loyalty dollars (you must be a Boomerang Books Account Holder - it's free to sign up and there are great benefits!)