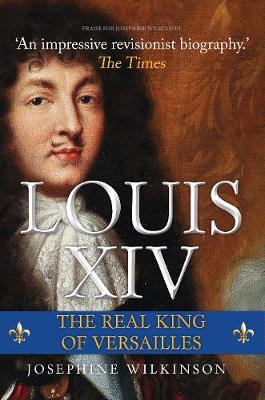 An intelligent, authoritative, and often surprising biography of the most famous of French monarchs. A fresh perspective on one of the most fascinating kings in European history. Praise for Josephine Wilkinson: 'An impressive revisionist biography.' The Times 'The writing is incisive, rigorous and academic whilst also being accessible and engaging.' Huffington Post Most recently the subject of a lavish primetime BBC historical drama, Louis XIV's story has all the ingredients of a Dumas classic: legendary beginnings, beguiling women, court intrigue, a mysterious prisoner in an iron mask, lavish court entertainments, the scandal of a mistress who was immersed in the dark arts, and a central character who is handsome and romantic, but with a frighteningly dark side to his character. Louis believed himself to be semi-divine. His self-identification as the Sun King, which was reflected in iconography by the sun god, Apollo, influenced every aspect of Louis's life: his political philosophy, his wars, and his relationships with courtiers and subjects. As a military strategist, Louis's capacity was ambiguous, but he was an astute politician who led his country to the heights of sophistication and power-and then had the misfortune to live long enough to see it all crumble away. As the sun began to set upon this most glorious of reigns, it brought a gathering darkness filled with the anguish of dead heirs, threatened borders, and a populace that was dangerously dependent upon - but greatly distanced from - its king.

» Have you read this book? We'd like to know what you think about it - write a review about Louis XIV: The Real King of Versailles book by Josephine Wilkinson and you'll earn 50c in Boomerang Bucks loyalty dollars (you must be a Boomerang Books Account Holder - it's free to sign up and there are great benefits!)


A Preview for this title is currently not available.
More Books By Josephine Wilkinson
View All