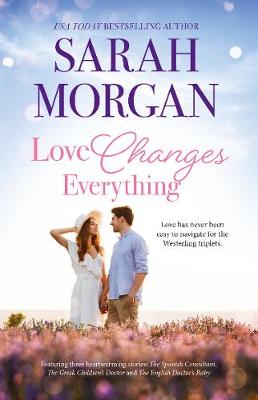 Jago is convinced she hasn't changed-so he's furious when he discovers that Katy is also his new A&E doctor! But even their mutual mistrust cannot hold back desire, and as they begin to uncover the secrets and lies of the past it seems that Jago and Katy have been given a second chance...

Libby Westerling has put herself up for sale at a charity auction to raise funds for the children's ward she works on. She's not looking for romance - she's asked her brother to buy her! Instead cool, sexy Dr Andreas Christakos makes the highest bid.

Andreas and Libby don't realise they are about to work together...and Libby is not in the market for a man. But this gorgeous Greek doctor is determined to change her mind - and he'll do whatever it takes...

Alex Westerling is a brilliant doctor. He's committed, dedicated and has a magical touch with his patients. He's also never out of the newspapers and celebrity magazines, as he's an aristocrat with a string of women lining up behind him. That's until beautiful nurse Jenny Phillips turns up on his doorstep - claiming that her late sister's baby, cradled in her arms, is his child! Alex is certain he has never, ever set eyes on Jenny or her sister before! But Jenny is sure Alex is the father - until he can prove otherwise.

» Have you read this book? We'd like to know what you think about it - write a review about Love Changes Everything/The Spanish Consultant/The Greek Children's Doctor/The English Doctor's Baby book by Sarah Morgan and you'll earn 50c in Boomerang Bucks loyalty dollars (you must be a Boomerang Books Account Holder - it's free to sign up and there are great benefits!)


A Preview for this title is currently not available.
More Books By Sarah Morgan
View All