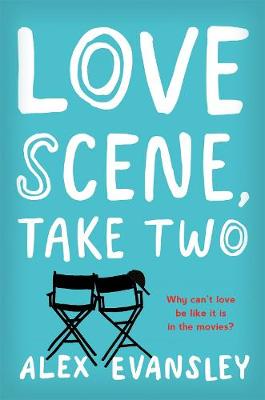 Teddy Sharpe is kind of famous. He might actually be on his way to being really famous, especially if he'd nailed an audition for the lead role in the movie adaption of the newest bestselling young adult book series. There's just one problem: He totally blew the audition. And he's stuck in a tiny North Carolina airport. And his maybe-ex-girlfriend kind of just broke up with him.

The weekend isn't exactly looking good until Bennett Caldwell, author of the very book series he just auditioned for, takes pity on him and invites him to her family's lake house. Away from the glitz and glam of Hollywood for a few days, Teddy starts to relax . . . and somehow he and Bennett just click. But dating is hard enough when you aren't the subject of several dozen fanblogs, and the Internet is full of juicy gossip about Teddy and Bennett . . . gossip that Bennett might not be prepared to handle.

Alex Evansley's debut novel, written from both Bennett and Teddy's perspectives, will have teens laughing, swooning, and falling in love along with these fantastically relatable characters.

» Have you read this book? We'd like to know what you think about it - write a review about Love Scene, Take Two book by Alex Evansley and you'll earn 50c in Boomerang Bucks loyalty dollars (you must be a Boomerang Books Account Holder - it's free to sign up and there are great benefits!)

Alex Evansley is a twenty-something-year-old writer from North Carolina. After earning a BA in political science from the University of South Carolina, she realized she wanted nothing to do with politics or becoming a lawyer, and decided to focus on writing stories instead. Her special talents include putting on workout clothes and not working out, sleeping during the day, losing socks, and procrastinating aforementioned stories. Love Scene, Take Two is her debut novel.