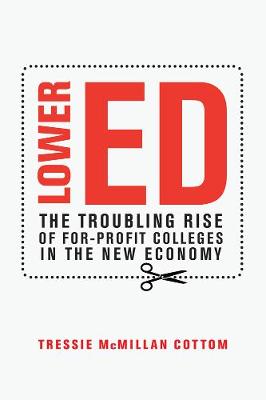 "The best book yet on the complex lives and choices of for-profit students."
-The New York Times Book Review

As seen on The Daily Show, NPR's Marketplace, and Fresh Air, the 'powerful, chilling tale' (Carol Anderson) of higher education becoming an engine of social inequality

More than two million students are enrolled in for-profit colleges, from the small family-run operations to the behemoths brandished on billboards, subway ads, and late-night commercials. These schools have been around just as long as their bucolic not-for-profit counterparts, yet shockingly little is known about why they have expanded so rapidly in recent years - during the so-called Wall Street era of for-profit colleges.

In Lower Ed Tressie McMillan Cottom - a bold and rising public scholar, herself once a recruiter at two for-profit colleges - expertly parses the fraught dynamics of this big-money industry to show precisely how it is part and parcel of the growing inequality plaguing the country today. McMillan Cottom discloses the shrewd recruitment and marketing strategies that these schools deploy and explains how, despite the well-documented predatory practices of some and the campus closings of others, ending for-profit colleges won't end the vulnerabilities that made them the fastest growing sector of higher education at the turn of the twenty-first century. And she doesn't stop there.

With sharp insight and deliberate acumen, McMillan Cottom delivers a comprehensive view of post-secondary for-profit education by illuminating the experiences of the everyday people behind the shareholder earnings, congressional battles, and student debt disasters. The relatable human stories in Lower Ed-from mothers struggling to pay for beauty school to working class guys seeking "good jobs" to accomplished professionals pursuing doctoral degrees - illustrate that the growth of for-profit colleges is inextricably linked to larger questions of race, gender, work, and the promise of opportunity in America.

Drawing on more than one hundred interviews with students, employees, executives, and activists, Lower Ed tells the story of the benefits, pitfalls, and real costs of a for-profit education. It is a story about broken social contracts; about education transforming from a public interest to a private gain; and about all Americans and the challenges we face in our divided, unequal society.

'The best book yet on the complex lives and choices of for-profit students.' - The New York Times Book Review

'Cottom does a good job of making the name Lower Ed stick, and she makes a solid case for reviewing the entire system of higher education for openness of opportunity.' - Kirkus Reviews

'Lower Ed is brilliant. It is nuanced, carefully argued, and engagingly written. It is a powerful, chilling tale of what happens when profit-driven privatization of a public good latches on to systemic inequality and individual aspirations.' - Carol Anderson, author of White Rage and professor of African American studies at Emory University

'This book is a must-read for anyone interested in the market forces currently transforming higher education. It is an eye-opening portrait of this burgeoning educational sector and the ways in which its rapid expansion is linked to skyrocketing inequality and growing labor precarity in the twenty-first-century United States.' - Ruth Milkman, past president of the American Sociological Association

'In a sea of simplistic and often bombastic critiques of American higher education, Tressie McMillan Cottom's trenchant analysis of Lower Ed stands out. As the Trump administration moves to make life ever easier for the nation's for-profit colleges, this book offers the most powerful form of resistance - detailed storytelling of the causes and consequences of this big-money industry. Anyone frustrated with high college prices, student debt, or the diminishing sense of hope surrounding so many communities needs to read this book.' - Sara Goldrick-Rab, author of Paying the Price and professor of higher education policy at Temple University

'With passion, eloquence, and data too, McMillan Cottom charts the harm we are doing to our youth, to higher education, and to democracy itself.' - Cathy N. Davidson, author of Now You See It and founding director of the Futures Initiative at the City University of New York

'[A] profound examination of the role of for-profit colleges in the emerging, 'new' American economic landscape. This is the best book I've read on for-profit (or shareholder) colleges and universities.' - William A. Darity Jr., professor of economics, public policy, and African American studies at Duke University 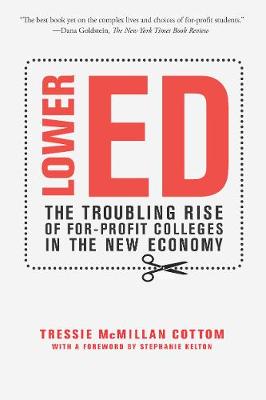 » Have you read this book? We'd like to know what you think about it - write a review about Lower Ed book by Tressie McMillan Cottom and you'll earn 50c in Boomerang Bucks loyalty dollars (you must be a Boomerang Books Account Holder - it's free to sign up and there are great benefits!)

Tressie McMillan Cottom worked in enrollment at two for-profit colleges. After experiencing the kinds of choices students faced, she left the for-profit educational sector to go study it in graduate school. She is now an assistant professor of sociology at Virginia Commonwealth University. She has been a columnist for Slate and an online contributor to the Washington Post and The Atlantic, and is quite fond of Dolly Parton, fancy coffee, brunch, nineties hip-hop, bacon, and the Delta blues. She lives in Richmond, Virginia.

A Preview for this title is currently not available.
More Books By Tressie McMillan Cottom
View All

The Credential Society: An Historical Sociology of Education and Stratification
$48.95 $49.95