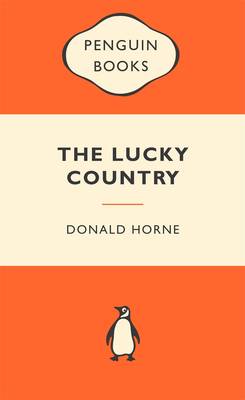 He just wanted a decent book to read . . . Not too much to ask, was it? It was in 1935 when Allen Lane stood on a British railway platform looking for something good to read on his journey. His choice was limited to popular magazines and poor quality paperbacks. Lane's disappointment and subsequent anger at the range of books available led him to found a company - and change the world. 'Australia is a lucky country, run mainly by second-rate people who share its luck.' First published in 1964 The Lucky Country caused a sensation. The book was a wake-up call to an unimaginative nation, an indictment of a country mired in mediocrity and manacled to its past. 'We believed in the existence of a vast reading public for intelligent books at a low price, and staked everything on it.' Sir Allen Lane, 1902-1970, founder of Penguin Books Reading habits have changed since 1935, but Penguin still believes in publishing the best books for everyone to enjoy, and that quality books published passionately and responsibility make the world a better place.

Other Editions - The Lucky Country: Popular Penguins by Donald Horne » Have you read this book? We'd like to know what you think about it - write a review about Lucky Country: Popular Penguins book by Donald Horne and you'll earn 50c in Boomerang Bucks loyalty dollars (you must be a Boomerang Books Account Holder - it's free to sign up and there are great benefits!)

Donald Horne has written more than twenty books, including works of social and cultural critique, history, novels, memoirs and satire, and has contributed to or edited a further twenty. His books include The Lucky Country, Looking for Leadership, The Story of the Australian People, Into the Open, His Excellency's Pleasure and The Avenue of the Fair Go. He is an emeritus professor from the University of New South Wales, where he taught for fifteen years, and was chancellor of the University of Canberra. He has chaired a number of cultural organisations, including the Australia Council, and served on several bodies concerned with constitutional reform, including the Australian Constitutional Commission. He was twice editor of The Bulletin; editor of The Observer and Quadrant; and contributing editor of Newsweek International. He has also written for many journals and newspapers in Australia, Britain, Europe and the United States. He is an Officer of the Order of Australia. His book 10 Steps to a More Tolerant Australia was published to critical acclaim in 2003. He died in 2005.