Lucky Lupin is a poignant yet light-hearted story of survival against the odds, based on Charlie Mortimer's life with HIV/Aids during the early years (1984-1996), when there was neither treatment nor cure. Using a combination of good luck, gallows humour, Fray Bentos pies and copious quantities of Solpadeine, Charlie survived not only the illness but the hysteria that accompanied the so-called 'gay plague'. Anyone infected became a social pariah; had the local launderette got word of his illness they wouldn't have washed his sheets but burnt them. Whilst taking full responsibility for the consequences of his behaviour - 'The fact is you don't get AIDS from watching telly' - Charlie initially took to the sofa and prepared for death, but, in time, he found the inner strength required to confront his fatal diagnosis, becoming, among other things, an antiques dealer and contemporary art collector.With blistering and often hilarious candour Charlie also recounts his childhood where he developed a passion for cars, cultivated by his adventurous mother 'Nidnod', his dizzying array of careers and somewhat curious domestic arrangements including the 'adoption' of a bank robber for twelve years. He also confronts head on his experiences of coming to terms with confused sexuality, addiction, epilepsy and clinical depression before finding lasting contentment.Praise for Dear Lupin:'As well as being the funniest book I've read in ages, it's also extremely touching. A delight then, on every front.' The Spectator 'Very, very funny.' Sunday Times'Wry, trenchant, often extremely funny, but also charmingly forbearing and forgiving.' Country Life 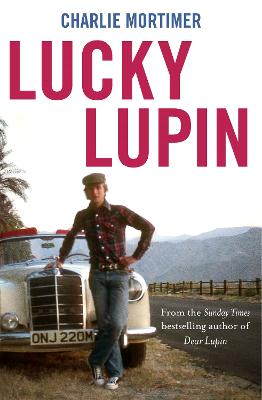 » Have you read this book? We'd like to know what you think about it - write a review about Lucky Lupin book by Charlie Mortimer and you'll earn 50c in Boomerang Bucks loyalty dollars (you must be a Boomerang Books Account Holder - it's free to sign up and there are great benefits!)

Charlie Mortimer was educated at Wellesley House and (reluctantly) Eton. He was, among other things, an officer in the Coldstream Guards, a vintage car restorer, oil rig roughneck and pop group manager, as well as a boat boy/mechanic in Kenya, a car salesman in California, a scrap-metal dealer, a manufacturer of boxer shorts in Asia, an antiques dealer and contemporary art collector. He now describes himself as 'a somewhat decrepit middle aged, middle class spiv (mostly retired)'. He recently edited his late father's (Roger Mortimer) letters to him in the Sunday Times bestseller Dear Lupin, which was subsequently adapted into a West End play. He currently lives with his partner in London.

A Preview for this title is currently not available.
More Books By Charlie Mortimer
View All