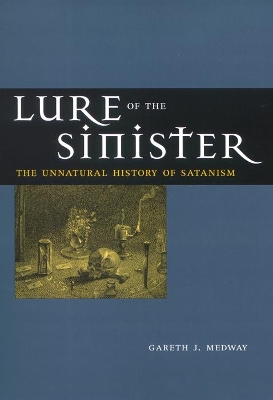 Lure of the Sinister

The Unnatural History of Satanism

Description - Lure of the Sinister by Gareth J. Medway

Rumors of Devil-worship, or Satanism, have circulated for centuries. Tales of Black Masses, demonic possession, mysterious nighttime ceremonies, and human sacrifices have captured the popular consciousness, prompting the Christian Church to move aggressively to root out Satanism and its practioners through often extraordinarily brutal means of detection and interrogation.
Until recently the stuff of myths and stories, allegations of occult worship have of late taken the form of police investigations concerning ritual child abuse, teens involved in Satanic cults, and serial killings. Unsubstantiated rumors have found their way into the popular and serious press and have been reported as fact, often with little or no verification. Obsessive anti-Satanists find evidence of Satanic lyrics in rock music from Led Zeppelin's "Stairway to Heaven" to Live Aid's "We are the World," while the numbers "666" are found in barcodes in supermarkets.
The Lure of the Sinister draws on a remarkable range of sources, from newspapers and pulp literature to early modern works on demonology to explore the entire history of Satanism from the origins of the Devil in pre-Christian theology through the Inquisition to the life and times of Aleister Crowley, "the "wickedest man in the world." The book also investigates modern charges of Satanism, the psychology of the people who make the allegations, and the legal and religious contexts in which they arise, showing how rumors of Devil-worship come to take on a life of their own. Lively and wittily written, The Lure of the Sinister reveals a strange tapestry of dark and fearful beliefs which have haunted our imagination for centuries.

Book Reviews - Lure of the Sinister by Gareth J. Medway

» Have you read this book? We'd like to know what you think about it - write a review about Lure of the Sinister book by Gareth J. Medway and you'll earn 50c in Boomerang Bucks loyalty dollars (you must be a Boomerang Books Account Holder - it's free to sign up and there are great benefits!)

Gareth Medway studied physics at Imperial College, University of London and has since been a freelance writer specializing in comparative religion and the history of occultism. His writing has been published in numerous specialist journals and magazines including Fortean Studies, Magonia (which awarded him the Roger Sandell Memorial Prize), and Pagan News.