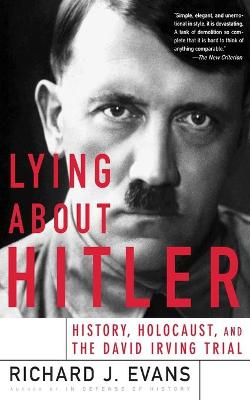 An illumination of one of the most explosive and publicized "holocaust trials" since that of Adolf Eichmann, by a leading historian who acted as chief adviser to the defense. In ruling against the controversial historian David Irving, whose libel suit against the American historian Deborah Lipstadt was tried in April 2000, the High Court in London labeled Irving a falsifier of history. No objective historian, declared the judge, would manipulate the documentary record in the way that Irving did. Richard J. Evans, a Cambridge historian and the chief adviser for the defense, uses this famous trial as a lens for exploring a range of difficult questions about the nature of the historian's enterprise.

» Have you read this book? We'd like to know what you think about it - write a review about Lying About Hitler book by Richard Evans and you'll earn 50c in Boomerang Bucks loyalty dollars (you must be a Boomerang Books Account Holder - it's free to sign up and there are great benefits!)

Richard J. Evans is Professor of Modern History at Cambridge University and a noted specialist on modern German history. He is the author of In defence of History and Death in Hamburg.