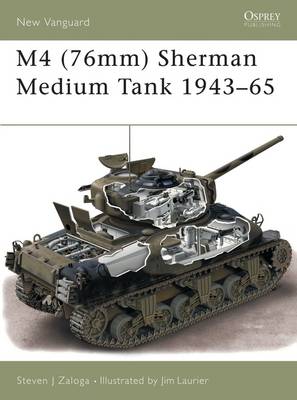 The M4 Sherman tank was the mainstay of the Western allies between 1942 and 1945. Fast and modern it was a big success and was transported as far afield as Russia and North Africa. The American Chief of Staff claimed in November 1943 it was 'hailed widely as the best tank on the battlefield today...'. However, by the Normandy invasion of June 1944 this was not the case: the new German heavy tanks such as the Panther and Tiger were completely outclassing the Sherman. This title covers the M4 version armed with the 76 mm gun, examining developments such as the HVSS suspension, using much new archive material.

» Have you read this book? We'd like to know what you think about it - write a review about M4 (76mm) Sherman Medium Tank 1943-53 book by Steven J. Zaloga and you'll earn 50c in Boomerang Bucks loyalty dollars (you must be a Boomerang Books Account Holder - it's free to sign up and there are great benefits!)

Steven J Zaloga was born in 1952, received his BA in history from Union College, and his MA from Columbia University. He has published numerous books and articles dealing with modern military technology, especially armoured vehicle development. His main area of interest is military affairs in the former Soviet Union and Eastern Europe in the Second World War, and he has also written extensively on American armoured forces. Jim Laurier is a native of New Hampshire. He graduated with honours from the Paiers School of Art, Connecticut, in 1978 and has worked as a freelance illustrator ever since, completing assignments in a wide variety of fields. Jim has a keen interest in military subjects, both aviation and armour, and is a Fellow member of the American Society of Aviation Artists, the New York Society of illustrators and the American Fighter Aces Association.