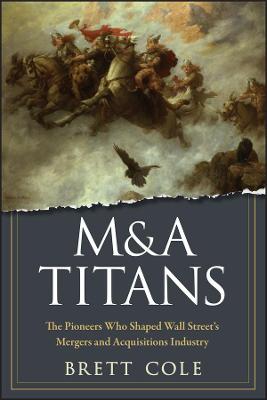 The Pioneers Who Shaped Wall Street's Mergers and Acquisitions Industry

This book focuses on the 11 men, lawyers and bankers, who are
responsible for the creation of Wall Street's merger industry. It
specifically concentrates on the events and personalities who
dominated Wall Street during the takeover battles of the 1970s and
1980s. Lawyers Joe Flom and Marty Lipton, the godfathers of modern
M&A, educated bankers on takeover laws and regulations as well
as tactics. Flom and Lipton were also superlative businessmen who
built their own firms to become Wall Street powerhouses. The two
men drew into their orbit a circle of bankers. Felix Rohatyn, Ira
Harris, Steve Friedman, Geoff Boisi, Eric Gleacher and Bruce
Wasserstein were close to Lipton. Robert Greenhill and Joe Perella
were close to Flom.
M&A Titans provides insight into the culture of the
different investment banks and how each of the bankers influenced
the firms they worked in as they became more powerful. Some such as
Gleacher, Harris, Wasserstein, Perella and Greenhill clashed with
the men running their firms and left. Others such as Friedman and
Boisi stayed and profoundly influenced how the firm did business.
The career of Michael Milken, perhaps the notorious name on Wall
Street in the 1980s, is also examined as well as the actions and
tactics of his firm, Drexel Burnham Lambert. Milken and Drexel
paved the way for the growth of private equity and helped
popularize attacks on management by investors such as Boone Pickens
and Carl Icahn.

» Have you read this book? We'd like to know what you think about it - write a review about M&A Titans book by Brett Cole and you'll earn 50c in Boomerang Bucks loyalty dollars (you must be a Boomerang Books Account Holder - it's free to sign up and there are great benefits!)

BRETT COLE is a correspondent for The Economist covering political, economic, and financial developments in North and South Korea. Between 2003 and 2007, he reported on Wall Street while working for Bloomberg News in New York, Prior to 2003, he worked for the news agency in Japan, Taiwan, and Australia.