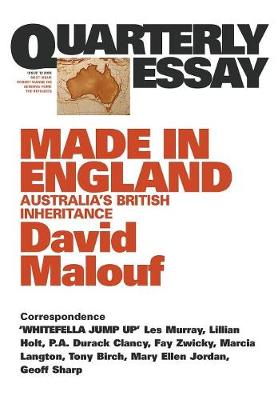 In the fourthQuarterly Essayof 2003, David Malouf looks at Australia's bond with Britain and wonders whether it wasn't the Mother Country which did most of the giving. This is an essay which presents British civilisation, the civilisation of Shakespeare and the Enlightenment and the Westminster system, as the irreducible ground on which any Australian achievement is based. Britain has always been the tolerant parent, and an older Australia could be both intensely patriotic and see itself as what it was, a transplantation of Britain. This relationship did not exclude America but it made for a sometimes complicated threesome of nations. This is a brilliant, deeply meditated essay by one of our finest writers about the traditions that shaped Australia and which connect it to one of the mightier traditions in world history.
'...Made in Englandis ... a case of one of Australia's most eminent novelists allowing himself to imagine, and by imagining to analyse, the hopes and glories, once and future, that were part of this new Britannia.' -Peter Craven,Introduction
'Any argument for the republic based on the need to make a final break with Britain will fail.' -David Malouf,Made In England

» Have you read this book? We'd like to know what you think about it - write a review about Made In England: Australia's British Inheritance: QuarterlyEssay 12 book by David Malouf and you'll earn 50c in Boomerang Bucks loyalty dollars (you must be a Boomerang Books Account Holder - it's free to sign up and there are great benefits!)

David Malouf is the internationally acclaimed author of novels including The Great World (winner of the Commonwealth Writers' prize and the Prix Femina Etranger), Remembering Babylon (shortlisted for the Booker Prize and winner of the IMPAC Dublin Literary Award), An Imaginary Life, Conversations at Curlow Creek, Dream Stuff ('These stories are pearls' Spectator), Every Move You Make ('Rare and luminous talent' Guardian), his autobiographical classic 12 Edmondstone Street and Ransom. His Collected Stories won the 2008 Australia-Asia Literary Award. In 2008 Malouf was the Scottish Arts' Council Muriel Spark International Fellow. He was born in 1934 and was brought up in Brisbane.

A Preview for this title is currently not available.
More Books By David Malouf
View All