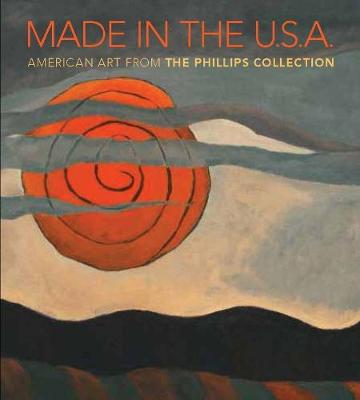 Description - Made in the U.S.A. by Susan Behrends Frank

American art has been essential to The Phillips Collection since its founding by Duncan Phillips in 1921. Phillips's collecting interests were decidedly against the grain: he acquired the work of living American artists, especially those outside the mainstream, when it was unpopular to do so and promoted diversity, as seen in works by self-taught artists, artists of color, and naturalized Americans, resulting in a rich assembly of independent-minded artists, including Milton Avery, Stuart Davis, Arthur Dove, and Georgia O'Keeffe. The Phillips Collection's superb collection of American art, acquired over half a century, is presented here for the first time in a comprehensive overview, featuring 160 works from heroes of the late 19th century-such as William Merritt Chase, Thomas Eakins, and Winslow Homer, who set the course for modern art in America-to abstract expressionists Willem de Kooning, Richard Diebenkorn, Adolph Gottlieb, and Mark Rothko, whose efforts to create a new visual language following World War II brought a new global significance to American art. A perennial guide to this important collection, the book includes scholarly essays on Phillips and on the Rothko Room, introductions to key groups of works in the collection, more than one hundred biographies of the most influential artists represented, and a chronology of Phillip's acquisitions and interactions with American artists.

Buy Made in the U.S.A. by Susan Behrends Frank from Australia's Online Independent Bookstore, Boomerang Books.

Book Reviews - Made in the U.S.A. by Susan Behrends Frank

» Have you read this book? We'd like to know what you think about it - write a review about Made in the U.S.A. book by Susan Behrends Frank and you'll earn 50c in Boomerang Bucks loyalty dollars (you must be a Boomerang Books Account Holder - it's free to sign up and there are great benefits!)

Susan Behrends Frank is associate curator for research and Eliza E. Rathbone is chief curator, both at The Phillips Collection.

A Preview for this title is currently not available.
More Books By Susan Behrends Frank
View All