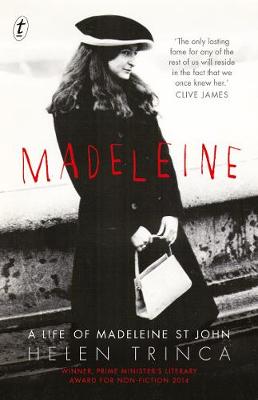 At the age of fifteen Madeleine saw herself as a painter and pianist, but Ms Medway peered down at Madeleine during her entrance interview in 1957 and announced- 'You know dear, I think you might write.'

Madeleine would write. But not for some time. The Women in Black, a sparkling gem that belied the difficulties that had dogged her own life, was published when Madeleine St John was in her fifties. Her third novel, The Essence of the Thing, was shortlisted for the 1997 Booker Prize, and she continued to write until her death in 2006.

Helen Trinca has captured the troubled life of Madeleine St John in this moving account of a remarkable writer. After the death of her mother when Madeleine was just twelve, she struggled to find her place in the world. Estranging herself from her family, and from Australia, she lived for a time in the US before moving to London where she joined Australians Robert Hughes, Germaine Greer, Bruce Beresford, Barry Humphries and Clive James. In 1993, when The Women in Black was published, it was immediately clear what a marvellous writer Madeleine St John was.

Other Editions - Madeleine: A Life of Madeleine St John by Helen Trinca 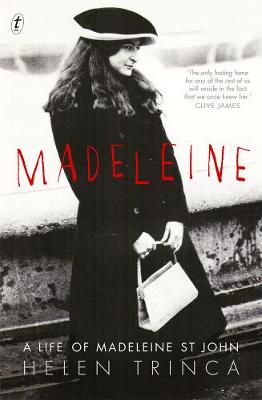 » Have you read this book? We'd like to know what you think about it - write a review about Madeleine: A Life of Madeleine St John book by Helen Trinca and you'll earn 50c in Boomerang Bucks loyalty dollars (you must be a Boomerang Books Account Holder - it's free to sign up and there are great benefits!)


A Preview for this title is currently not available.
More Books By Helen Trinca
View All