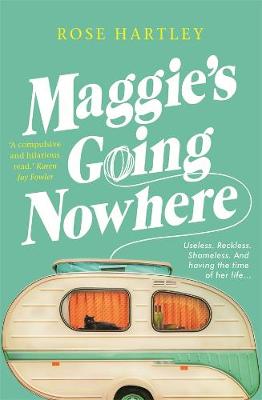 Maggie's Going Nowhere is a fierce and funny debut introducing a thoroughly relatable and offbeat heroine. If you enjoy Fleabag, you'll adore Maggie!

'A compulsive and hilarious read. In Maggie, Hartley has created one of those indelible characters of whom we must thoroughly disapprove and yet cannot help but love.' Karen Joy Fowler

In one day, she's dumped by her boyfriend, disinherited by her mum, and kicked out of the three-year degree she'd stretched to a decade. And that was before she received the letter saying she owed the government $70,000.

But that's no reason to grow up, is it?

With a decrepit 1960s caravan to call home, Maggie has to prove to her mother she can survive without a safety net, stop her loyal best friend Jen from marrying a scumbag, and convince her sexy workmate Rueben that she's not a walking disaster. For someone who's spent her life avoiding hard work, she sure can move mountains when she's got a little motivation - just don't ask her to move the caravan. 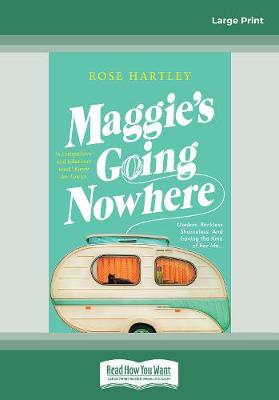 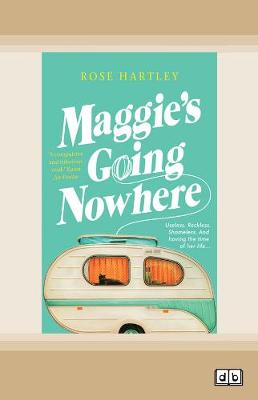 » Have you read this book? We'd like to know what you think about it - write a review about Maggie's Going Nowhere book by Rose Hartley and you'll earn 50c in Boomerang Bucks loyalty dollars (you must be a Boomerang Books Account Holder - it's free to sign up and there are great benefits!)

4.5?s Maggie’s Going Nowhere is the first novel by Australian author, Rose Hartley. The worst thing in Maggie Cotton’s life is that her best friend, Jen is planning to wed a take-her-for-granted FIFO mine rigger named Jono: she knows Jen deserves better. But then, in the space of a few days, it all turns upside down for Maggie: kicked out of her commerce degree course, dropped by her boyfriend, disinherited by her mum, and homeless. Looks like (shock, horror!!) she’ll have to get a job because, on top of all that, Centrelink has decided she owes them money.

The interim plan is a volunteer position, twenty hours a week at a local charity, so her Centrelink payments will continue. She can put up with a bit of religion, surely, if it means she can eat. And look at luscious, tattooed Reuben. She’s used her last monetary endowment from her heretofore generous mother to buy a little caravan: a 1962 hand-built Periwinkle ten-footer with seafoam-green racing stripe (just like her 1970 Holden panel van), beautifully made but boasting absolutely no mod cons at all. It has no bathroom, the pump tap doesn’t work and one window is broken. It’s parked on the street, with no electricity.

Initially, Maggie doesn’t present well: she’s lazy, rude to her mother, uses foul language, seems to have the morals of an alley-cat and comes across as an entitled twenty-nine-going-on-fifteen-year-old. She does seem to care about her best friend, yet abuses her generosity; she’s quite selfish and self-centred, and rationalises her poor behaviour and lifestyle choices as “eschewing materialism”.

Maggie’s usual practice is to use her creative energy figuring out ways to take advantage of family and friends (freeloading), energy that would surely be better spent finding and doing paid work. As her life spirals ever downward, she somehow adjusts. After more setbacks, and at rock bottom, the reader will be wondering if she will finally begin to take responsibility for her own life, to finally redeem herself.

Despite the fact that Maggie is not all that likeable (frankly, she’s sometimes a bit obnoxious), it’s hard not to hope she will miraculously turn her life around, mature a bit, and perhaps have a meaningful relationship with a man. Does she get there? Read it and see…

Hartley gives Maggie a great cast of support characters, some of whom are nasty, some pathetic, while others are sweet and good and wise; at least one is utterly hilarious. There are plenty of laugh-out-loud moments that include climbing through windows, a pavlova revenge and spring rolls used as missiles. A gorgeous cover encloses this brilliantly funny and moving debut novel. This unbiased review is from an uncorrected proof copy provided by Better Reading Preview and Penguin/Michael Joseph Australia.


A Preview for this title is currently not available.
More Books By Rose Hartley
View All