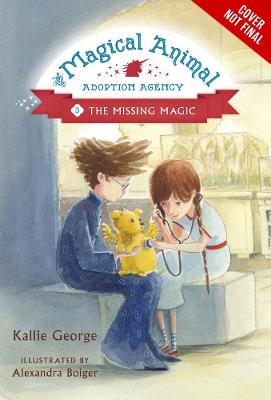 A new volunteer has joined the Magical Animal Adoption Agency, and Clover's not too happy about it! Oliver Von Hoof is supposed to be an expert on magical animals, but he's barely older than Clover. How can he be an expert on anything? And it doesn't help that Mr. Jams keeps turning to Oliver instead of Clover for help with the animals.When Mr. Jams is called away from the Agency on a secret mission, Clover and Oliver are put in charge of the Agency once again. But when Picnic the invisible puppy starts turning visible, and the Agency's green cat, Dipity, begins to look white, Clover and Oliver realize that all of the amazing creatures are becoming ordinary. Even Oliver's trusty magical wands aren't enough to cure them! Will Oliver and Clover learn to work together in time to restore the animals' magical powers?Alexandra Boiger's delightful illustrations shine in the third book of Kallie George's The Magical Animal Adoption Agency series where an open heart can best the nastiest of spells.

» Have you read this book? We'd like to know what you think about it - write a review about Magical Animal Adoption Agency, The, Book 3 book by Kallie George and you'll earn 50c in Boomerang Bucks loyalty dollars (you must be a Boomerang Books Account Holder - it's free to sign up and there are great benefits!)

A Preview for this title is currently not available.
More Books By Kallie George
View All