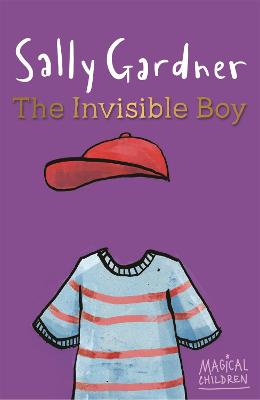 When his parents are lost in space, Sam is left, heartbroken, in the care of the horrible Hilda Hardbottom. Then he finds a tiny spaceship in the cabbage patch and meets a little alien called Splodge. How Splodge makes him invisible, and how Sam uses his new talent in his darkest hour, makes a touching and extremely funny story with lovely memorable characters.

» Have you read this book? We'd like to know what you think about it - write a review about Magical Children: The Invisible Boy book by Sally Gardner and you'll earn 50c in Boomerang Bucks loyalty dollars (you must be a Boomerang Books Account Holder - it's free to sign up and there are great benefits!)

Sally Gardner is an award-winning novelist from London. Her books have been translated into 22 languages and have sold more than one million copies in the UK. Her historical novel for older readers, I, Coriander, won the Smarties Children's Book Prize in 2005. Two thrillers both set at the time of the French Revolution, The Red Necklace and The Silver Blade, which was shortlisted for the Guardian Children's Fiction Prize in 2009, followed. Actor Dominic West (The Wire) has bought the film rights to both titles. Her YA novel, The Double Shadow, was published in 2011 to critical acclaim. Sally Gardner's stories for middle readers include Lucy Willow and the popular Magical Children series of six titles: The Strongest Girl in the World, The Invisible Boy, The Boy with Magic Numbers, The Smallest Girl in the World, The Boy with the Lightning Feet, and The Boy who could Fly, which are also available as audio books. She has also written and illustrated picture books including The Fairy Catalogue, The Glass Heart, The Book of Princesses and Playtime Rhymes. Sally Gardner continues to be an avid spokesperson for dyslexia, working to change the way it is perceived by society. She is dyslexic and argues that it is not a disability, but a gift.Her website is www.sallygardner.net and you can follow her on Twitter @TheSallyGardner